Christopher Ogochukwu Ejime, of Manchester, pleaded guilty to two counts of fraud when he appeared at Chester Crown Court 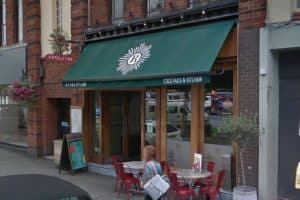 A man who fraudulently used his brother-in-law’s security licence so he could work as a doorman at a late-night Cheshire bar has been convicted.

Christopher Ogochukwu Ejime, of Manchester, pleaded guilty to two counts of fraud when he appeared at Chester Crown Court this week.

The case follows the prosecution by the Security Industry Authority (SIA) in January of Ejime’s brother in law, Muyiwa John Adegbola, who received a suspended prison sentence.

Ejime, who had previously denied the charges at an earlier hearing at Manchester Magistrates’ Court, was found to be fraudulently using Adegbola’s licence on June 7, 2019.

He was discovered by SIA investigators who were carrying out routine licence checks with Cheshire Constabulary at Wilmslow’s Revolution Bar.

The defendant was working for Radius DS Ltd despite being unlicensed.

He told the investigators that the licence belonged to his wife’s brother, Adegbola, and he had given him him the licence to use.

Ejime further added that he had worked on four occasions as a door supervisor using the licence.

The SIA’s investigators seized the licence and began a formal investigation into the case.

Adegbola told the SIA that he had misplaced his wallet containing his licence., adding that he had reported the loss to the police.

He also said that he had been on sick leave at the time of the offence.

On October 1, 2019, Adegbola was formally interviewed under caution by SIA investigators., during which he denied knowing Ejime.

Ejime did not co-operate with the SIA during its investigation and failed to attend an interview.

The court handed Ejime two concurrent 12-month community orders of 60 hours unpaid work, and a requirement to pay a victim surcharge of £85.

Woman “barred for life” by JD Wetherspoon over racist attack, plus Story Update