Court proceedings were interrupted this afternoon after a defendant punched a security guard in the dock. 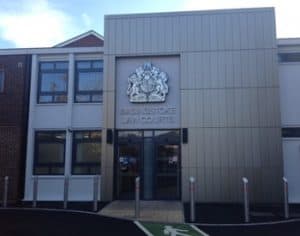 He is accused of punching a 62-year-old Tesco employee in the face outside Tesco’s River Way branch in Andover on Thursday night.

Prosecutor David Fossler had told the court that the victim has “life-changing injuries at best, life-threatening at worst”.

“The prognosis is not good,” he said.

Mr Fossler said that the victim fell to the floor “like a sack of potatoes” and “went limp before he went down”.

“He hit the ground with a serious thud,” he added.

Appearing in court this afternoon, Donovan spoke to confirm his name and address before interrupting District Judge Timothy Pattinson when he decided not to grant him bail.

Donovan said: “Why won’t you let me see my sister? It is all lies coming from you.

When District Judge Pattinson explained how he reached his decision, which cannot be reported at this stage for legal reasons, and told security guards to return him to the cells, Donovan remained unmoved.

After a security guard tried to encourage him to leave the dock, the 27-year-old Andover resident swung his right arm at the security guard, punching him in the head.

A struggle ensued in which the other security guard hit a panic alarm, and the defendant, dressed in a grey custody tracksuit, was eventually bundled out of the dock by four guards.

The Ministry of Justice confirmed the security guard did not suffer significant physical injuries and came back into court a few minutes later to retrieve Donovan’s glasses, which had come off in the struggle.

Donovan was remanded into custody pending his next hearing in September.

Donovan will next appear before Winchester Crown Court on September 1.

An MoJ spokesperson told The Gazette: “A punch was thrown at a Serco dock officer.

“He is uninjured and the defendant was restrained and has been remanded back to custody.”