Shocking video footage has emerged on social media of a pensioner being kicked by doormen as they brutally attacked a man lying on the floor. 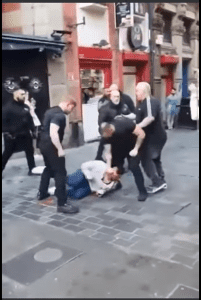 The 19-second clip starts with two men, who appear to be doormen, leaning over a man wearing a grey top on the floor. One of them punches the man on the floor as another appears to hold him.

A few seconds later, the video shows the doorman – to the left of the man on the floor on the Liverpool city centre street – grabbing him by the back of the neck of and kneeing him to the face, the ECHO reports. He then grabs him by the face and repeatedly punches the man.

The man in the grey top falls onto his side, where the clip shows the doorman kicking him to the chest. Another doorman punches him again in the face.

At around 13 seconds into the video, a pensioner appears to try and break up the fight and approaches the doorman to stop. The ECHO understands the scenes unfolded on Saturday, April 2 but the footage has only recently emerged.

The clip shows another bouncer from behind kicking the older man. The man on the floor then gets up and walks away.

It is not clear what may have taken place before the filming began. Many people were shocked by the incident after it was shared on social media.

People in the video can be heard telling them to “stop” and others can be heard shouting as the incident unfolds. One person told the ECHO this was not a true reflection of Liverpool’s nightlife scene and other people described the scene as “disgusting”.