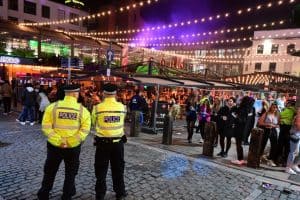 Adam Potter has been asked “Is Angela in tonight?” on multiple occasions since he started his job as doorman in Liverpool city centre five months ago.

The code phrase is part of the Ask Angela campaign aimed at helping people who feel unsafe, vulnerable or threatened in bars, clubs and other night time venues.

Anyone who feels this way, can approach bar or security staff using the special code word ‘Angela’, which indicates to staff that they require help or support.

This might be in the form of calling them a taxi, reuniting them with a friend or calling security and/or the police.

Adam, 49, said every night at work he is approached by women who ask him to keep an eye on men who are making them feel uncomfortable on the dancefloor.

And on a couple of occasions Adam said he has been asked by women “is Angela in tonight?”, before stepping in to help them.

Adam told the ECHO: “They basically say ‘can you keep an eye on this guy he’s making me feel uncomfortable?’

“I probably get that at least once a night, possibly three or four times a night – that’s just girls who come up to me.

“They might say ‘he’s tapped me on the bottom’, in which case he gets thrown out. Any touching inappropriately they get thrown out immediately.”

Adam has spoken out in the hope of raising awareness of the Ask Angela campaign and encouraging other bar staff to learn about the initiative.

It comes after a post was shared widely on social media about the importance of the campaign in keeping people safe on nights out.

Adam said: “What happens is, if a girl comes up to you and says ‘Is Angela in tonight?’ you know exactly what she means.

“What you then do is say ‘yes ‘she’s in tonight just come with me.’ You take her behind the bar into the staff area and phone for a taxi.”

In more extreme cases, bar staff might have to call the police or security.

Adam said: “I went into this job basically just to help people and I do my very best but when I hear about girls constantly being harassed and not being as safe as they used to be going out it makes me feel upset.”