A nightclub doorman has admitted physically assaulting a young customer – who remains traumatised by the experience more than a year on. 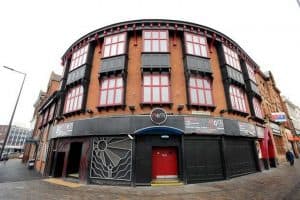 Craig Sawbridge assaulted the woman during a dispute at Mosh, in Leicester city centre, by restraining her and holding her against a wall, a court heard.

The woman begged to be released while Sawbridge’s colleagues carried out his instruction to go through her bag to look for ID.

The 40-year-old had previously denied any wrongdoing but he appeared at Leicester Magistrates’ Court yesterday to plead guilty to a single charge of ‘assault by beating’.

The woman remains traumatised by the assault and went on to suffer sleepless nights, prosecutor Sally Bedford told the court.

Sawbridge was on duty with colleagues at the St Nicholas Place club on the evening of Sunday, January 26 last year, Ms Bedford told the court.

She said: “She was offering no threat and, clearly, the defendant was in a position of authority.”

The exact circumstances which led to the incident were not described in court.

Ms Bedford said: “The defendant previously asserted that she had assaulted him and that he had acted in self-defence and had used reasonable restraint,

“The victim is a young girl who is very lightly built. She was detained by this defendant, clearly unlawfully, and held against her will.

“She was pushed against the wall while the defendant told his colleagues to go through her bag and take photographs of her belongings.

“This incident has had a profound effect on this very young girl. She says it has played on her mind and ever since she has been struggling to sleep. She has had to undergo counselling.

“She just wanted to leave the club and is seen trying to get away from this defendant on a number of occasions and is heard pleading to be let go.

“Nevertheless, he instructed his colleagues to stay and keep this girl against her will while he carried out what he thought were legitimate inquiries.”

The case was adjourned to give probation officers time to interview the defendant and prepare a report on him.

His solicitor, Rachel Diario, said she would address the court in full at the sentencing hearing, which is due to take place next month. She added: “He is a man of good character.”

Magistrate Madeline Bonser told Sawbridge, of Stephenson Road, New Parks, Leicester: “This matter is not going to be dealt with today.

“The court has asked the Probation Service to prepare a report on you. That report will be available to the court which is to sentence you.”

Sawbridge will be sentenced at the same court on Thursday, April 22.