A security guard who refused two men entry to JD Sports in Speke suffered an injury in an “altercation” after reportedly being threatened with a knife. 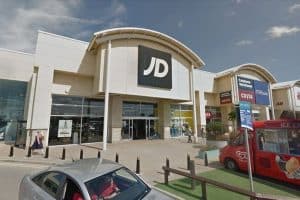 Two men were refused entry to the shop by a security guard, who was said to have been threatened with a suspected Stanley-style knife and then attacked.

The member of security staff received first aid treatment at the scene for an injury to his leg.

The two men then fled from the scene in a Silver Seat Leon towards Liverpool city centre.

Police said a 30-year-old man from Thatto Heath in St Helens was later arrested on suspicion of affray.

He has now been released under investigation while CCTV and witness enquiries are ongoing.

Following the attack, shoppers at the park reported seeing the store taped off with police vans parked outside.

A spokesperson for Merseyside Police said: “We have arrested a man following an incident in Speke yesterday (Thursday 24 June).

“At around 3pm we received a report of an altercation at JD Sports in New Mersey Retail Park after two men were refused entry to the shop.

“During the altercation, a member of security staff was reported to have been threatened with a suspected Stanley knife and assaulted.

“The two men made off from the scene in a silver Seat Leon in the direction of Liverpool City Centre.

“A 30-year-old man from Thatto Heath was later arrested on suspicion of affray. He has been released under investigation pending further enquires.

“The member of staff received first aid at the scene for an injury to his leg.

“CCTV and witness enquiries are ongoing.”

Detective Inspector Sean Kelly-Martland said: “To be threatened and attacked in your place of work in this manner is utterly despicable and will not tolerated.

“While we have made an arrest enquiries remain ongoing so if you witnessed the incident and have any information, please get in touch so we can take action.”