A security guard accused of critically injuring a man he ejected from a city centre shop wept in the dock after being cleared by the jury. 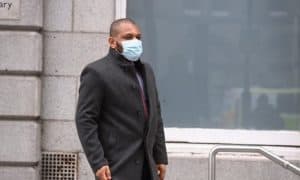 Chukwuemka Ibeabuchi, 32, was alleged to have pushed Andrejs Galkins so hard onto the Union Street pavement that he required emergency brain surgery for a life-threatening blood clot.

The jury at Aberdeen Sheriff Court was told Ibeabuchi threw Mr Galkins, 33, out of the Co-op store on April 26 2017 after a brief earlier altercation.

Giving evidence Ibeabuchi told the court he had suffered racial abuse while “doing his duty” as a security guard.

Ibeabuchi, who was studying for a masters degree in international commercial law at Robert Gordon University at the time, said he had encountered Mr Galkins “hovering” around the alcohol section twice that afternoon already.

‘He tried to punch me in the face’

He had alerted the police and was told to keep an eye out for further trouble.

Ibeabuchi told the court: “He had been in the store with a friend of his and they tried to steal alcohol. I stopped them. On the first occasion, he tried to punch me in the face and I asked them to leave the store.

“The gentleman’s behaviour was quite disruptive. He was not in the store to shop. It was abusive and he was using language that I would say was racially discriminatory as well.”

Ibeabuchi said it was because of this combination of behaviour that he “invited him to leave the store”.

“When he refused I believe it was my responsibility to get him out,” Ibeabuchi added. “I remember he was quite aggressive.”

He told fiscal deputy Felicity Merson that he was “quite sure” he hadn’t pushed the man, instead insisting Mr Galkins has been holding on to his arm and he had “freed him from my person”.

He said: “I did not push him. If he had agreed to leave the store, as he did on two occasions before, this would not have happened.

“His behaviour was distributive and I felt like it was my duty. I wouldn’t be doing my job properly if I didn’t do what I was supposed to – which was invite him to leave and, when he refused, to physically get him out of the store.”

‘I get abused all the time doing that kind of job’

Ibeabuchi said he been trained to handle the situation responsibly.

He said: “I get abused all the time doing that kind of job. I think it’s expected.

“Usually when you speak to customers they swear at you but they do go away, but that’s not what he did.

“I led him quickly towards the door. It was really a case of me letting him go.

“But unfortunately he has fallen over which was not what I intended. It was surprising to me.

“I thought he would just swear at me and leave like the previous two times. But he was resisting.”

Urging the jury not to convict his client, defence agent Iain McGregor said: “Mr Ibeabuchi just wanted to get Mr Galkins out of the store. That was his job.

“Everything done by Mr Ibeabuchi was reasonable. The whole function of him being there was to deal with situations such as this. I would say he dealt with the situation in a reasonable and calm manner.”

Ibeabuchi, of Nelson Court, Aberdeen, alerted police through his radio and called the ambulance from his mobile immediately after the incident. He was charged by police that evening.

The jury took just 35 minutes to return the unanimous not guilty verdict.

The Crown did not seek a conviction over the second charge Ibeabuchi was facing – failure to appear in court at an earlier date.

“All the training they must have received had been forgotten, and excessive and unnecessary force was used” as One Doorman is Jailed and five others spared.

Doorman Finished his Training and awaiting his Licence, taken to Court for working without a Licence