Stuart Crompton was working as a security guard on the doors of Lidl when he noticed a ‘suspicious’ man enter the store. 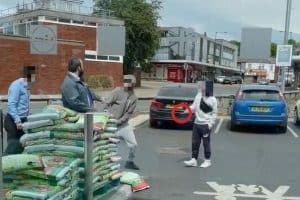 A security guard was threatened with a knife while working outside a Lidl in a shocking moment that was captured on camera.

The terrifying incident was captured on video at a store in Manchester on June 14.

Stuart Crompton was working as a security guard on the doors of Lidl when he noticed a ‘suspicious’ man enter the store.

The customer became aggressive when he noticed 27-year-old Stuart had followed him into the shop.

After being asked to leave by the store manager, Stuart led the gentleman out of the establishment.

He says the man then started asking for a fight.

“I tried to move him away and another lad stepped in my way, I didn’t know they were together initially,” he said according to Manchester Evening News.

“I pushed him away and he pulled a knife out and said he would stab me.

“I froze a little bit; in my head I didn’t think he was going to use it but it’s always in the back of my mind that something might happen.

“I was more worried about the public around me because there were kids and women around. It was 2pm in the afternoon and broad daylight.

“I’m always looking over my shoulder now. It just shows you don’t know who carries a knife.

“Someone’s life could have been over in seconds. It’s crazy.”

Stuart, from Radcliffe, says he has since been offered a stab-proof vest to wear while at work.

He described the incident as the worst he has experienced in his time working as a security guard.

He continued: “It’s left me shocked. There’s a video and I keep looking back and think, ‘Wow, it could have gone so wrong’”.

A spokesman for Greater Manchester Police confirmed enquiries into the incident are ongoing.

In a statement, the force said: “Officers were called to a disturbance at Lidl on Dale Street in Radcliffe at about 1.50pm on Monday 14 June 2021.

“Two males, believed to be teenagers, were asked to leave and one produced a knife.

“Both males had left when police arrived and enquiries are ongoing.”

In a statement, Lidl added: “We can confirm that police were alerted to an incident at our Radcliffe store, as a result of violent and abusive behaviour towards store colleagues.

“Our teams are working exceptionally hard under challenging circumstances to maintain a safe store environment for our customers, and under no circumstances do we tolerate behaviour of this nature.

“We will continue to support the police and provide any assistance needed, but as this is now a police matter, we are unable to provide any further information at this time.”