A pub doorman failed to make sure that a vulnerable dad could still breathe as a punter kept him in a ‘chokehold’ outside, an inquest has heard. 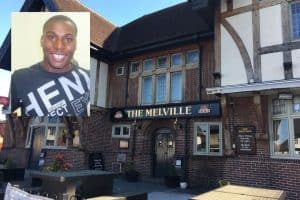 Gavin Brown died eight days after a ‘tussle’ outside The Melville Hotel, in Stretford, having been placed in an induced coma at Salford Royal Hospital.

An inquest into the 29-year-old dad-of-two’s death is currently taking place at South Manchester Coroners’ Court, in Stockport.

Jurors have been told this week police found Mr Brown deeply unconscious and with a plastic bag over his face moments after he punched doorman Alain Kamga and tried to gouge his eyes out.

Mr Brown was restrained on the ground by Stefan O’Donnell, a regular at the pub, who told the court he used his arm to press Mr Brown’s chin against his chest while lying to the side of him.

Another doorman called Amechi Omeje, who was known to colleagues and regulars at The Melville Hotel as Mitch, gave evidence to jurors today (November 25).

In a long spell of tough questioning from coroner Andrew Bridgman, Mr Omeje said he stayed in the same position on the ground until police arrived.

The court heard he failed to break up the ‘chokehold’ Mr O’Donnell kept Mr Brown in – which went against door security training guidance – while Mr Omeje admitted he didn’t think to remove the item covering his face as it ‘all happened within minutes’.

Mr Omeje told the court that he was inside the pub at the time the altercation began on April 12, 2019, and by the time he went out Mr Brown was already on the ground with Mr Kamga and Mr O’Donnell.

He said Mr O’Donnell was already holding Mr Brown ‘in a restraining manner’, before he went to release his colleague Mr Kamga from the melee.

Mr Omeje admitted he helped Mr O’Donnell hold Mr Brown on the ground, but said he was more focused on helping his colleague and getting the emergency services to arrive.

Mr Bridgman asked Mr Omeje whether he considered Mr Brown was struggling to breathe while being restrained on the ground.

He did not answer that question, but admitted he did have a duty of care to Mr Brown.

“That’s why I was trying as much as I could to have the police and medics present,” added Mr Omeje.

He said Mr Brown had previously tried to get into the pub on occasions, but would ‘normally just leave’ after a few minutes.

Asked whether it was ‘customary’ for a member of the public like Mr O’Donnell to be the main person restraining someone in an altercation, Mr Omeje replied: “That’s the position I came out and found myself in.

“Did I have time to make that decision? I don’t think so.”

The court heard that Mr Omeje gained his first licence as a doorman in 2010 and had no further training after that point, other than a course on awareness about terrorism.

A training manual for the Security Industry Authority was shown to Mr Omeje in court, who said he ‘may have’ seen it during his career as a bouncer.

The manual warned door staff about restraining people and the risks of asphyxia, and specifically told them not to use an arm lock which appeared similar to one Mr O’Donnell could be seen using in the body-cam footage from police.

But Mr Omeje insisted the positions were ‘not quite the same’, adding: “When I got out they were both on the ground. How they got to that position, I don’t know.”

He told the court he could feel ‘resistance’ from Mr Brown in his arm and let go of him when police arrived, but claimed he could not hear the dad-of-two shouting to be let go.

Mr Bridgman asked: “The fact that he was not shouting ‘get off me’ – did that make you think that he might not be OK?

The former doorman, who said he ended work in the profession following the melee on April 12, 2019, told the court that he believed Mr Brown was wearing a face mask when he first saw him.

However, he noticed this was actually a plastic bin bag when he moved as police arrived.

He never made an attempt to remove it, the court heard.

“Because of what was going on around me, I barely had time to think or process anything,” said Mr Omeje.

“It all happened in minutes.”

The inquest also heard written statements from witnesses including Lindsay-Ann Hartley, who had popped into The Melville for a drink after work with two friends.

She said the altercation ‘appeared to be unprovoked’ and began with Mr Brown ‘moving around like a boxer’ with Mr Kamga outside.

“At first I thought they were just messing about,” Ms Hartley added.

But she soon realised things were more serious and heard Mr Kamga make a loud scream.

She said: “I’ve never heard a man scream like that before.”

Ms Hartley shouted inside the pub for water before ‘some people, all males, pulled the bouncer away and then got hold of’ Mr Brown in ‘chaotic’ scenes.

She described the ‘headlock’ that Mr O’Donnell had put Mr Brown in as similar to a ‘chokehold’ seen in mixed martial arts on the TV.

Ms Hartley said the two men lay on the ground in a ‘spooning’ position, with Mr O’Donnell’s forearm around Mr Brown’s neck, while others outside ‘seemed to leave it’ to Mr O’Donnell.

In a separate statement, Dr Andrea Hill said Mr Kamga was examined at Wythenshawe Hospital at around 11pm on April 12, 2019.

He had swelling and redness to his left eye, was diagnosed with left corneal abrasion and given antibiotics for treatment.

In their statements to court read on Monday, relatives of Mr Brown said they didn’t know why he went to The Melville on the night of the altercation.

Man Glasses Doorman in the face leaving him to get surgery, is jailed for 15 months