A Napoleons Casino Doorman has been jailed after he carried out a “frightening” and “vicious” attack on a casino customer. 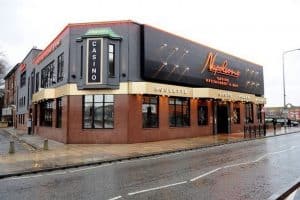 A Hull judge said he was “worried” by Matthew Diment’s attempts to minimise the assault and his own behaviour on December 27, 2018.

Diment was caught on CCTV punching the man who had asked him if he could charge his phone, as that was the only way he could contact his partner to ask her to pick him up from the casino in George Street.

The man had previously been told by other staff members at Napoleons that he could charge his phone and he questioned Diment when he was later told “no.”

Prosecuting, Rachel Scott, told Hull Crown Court on Monday: “He continued to ask and due to his persistence the defendant asked him to leave.

“He took hold of him by the arm and tried to pull him out of the venue. The man pushed him away and the defendant struck him in the face.”

Diment hit the man four times in the face, fracturing the man’s nose.

Ms Scott said: “He continued to strike him and he took him to the ground and sat on him for a few minutes before going back inside.”

The man returned home and was taken to Hull Royal Infirmary by his partner.

An X-ray showed his nose had suffered fractures. He also lost his sense of taste and smell and struggled to breathe as a result of his injuries.

In a victim personal statement, the man told the court: “I lost my vision for two weeks which was frightening. I knew the swelling would go down but I didn’t know if the damage to my vision would be permanent.”

Due to his injuries, the man has been unable to permanently return to his role as an offshore oil rig worker.

He said: “I’ve been suffering from breathing difficulties. I was meant to have surgery in January 2020 to fix my airways but that did not happen because of the coronavirus pandemic but that is going to happen. I will need six to eight weeks recovery time.”

Mitigating, Michael Forrest, told the court that Diment was found guilty of assault occasioning actual bodily harm by a jury at his trial in November.

He said: “His mind has been burdened with this for the last two years. In November when the trial was in jeopardy he wanted it to continue and for the matter to be resolved.

“He was just a person trying to put his case across.”

Diment claimed the attack was carried out in self defence but after watching CCTV footage taken from outside Napoleons, the jury disputed that claim.

Mr Forrest told how Diment is to become a father for the fourth time at the end of January.

He appealed to Recorder Barnett and said that if Diment was sent to prison, his family would suffer and would have no choice but to move house.

However, the judge said the crime was so serious that only an immediate prison sentence would be suitable.

He said he was “concerned” and “worried” by Diment’s attempts to minimise the attack.

Recorder Barnett told him: “You seemed blind to the actions you had committed even when shown to you in slow motion.

“You attempted to justify your actions that were nothing short of frightening. Your actions were clear to all in the court room apart from you and that worries me.

“You changed from being a door supervisor to somebody who viciously attacked an innocent member of the public and this has caused me great worry. You have a lack of remorse and understanding about how you should have behaved and that gave me cause for concern.”

Diment has been jailed for six months and two weeks.