A MAN caught stealing booze from a supermarket headbutted the security guard who collared him. 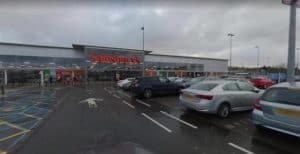 A sheriff said he was giving Paul Coulthard “one last chance” as Glasgow Sheriff Court heard the details of the theft and assault.

On May 1 this year the 21-year-old was seen taking a litre bottle of whisky and a 70cl bottle of rum from Sainsbury’s Braehead.

The court heard the booze had a total value of £38.

When staff caught Coulthard, from Kelvinbridge, and tried to remove him from the store, he began to kick off.

The depute fiscal told the court: “Shop workers were made aware of the situation of the theft and they attempted to usher the accused from the store.

“However, he was not complying so they ushered him into the security room to wait for police and while being taken to the back of the store the accused launched his forehead forward at the victim, causing him to raise his right arm and the accused headbutted his arm.”

“It is clearly an issue for him because it seems to be when under the influence he becomes incapable.

“He did not go in to the store with the intention of stealing but due to his intoxicated state he did so.

“He was involved in a road traffic accident last year and has ongoing back pain.

“The security officer took hold of him and that was a response to the pain he felt by being grabbed.”

Coulthard, the court was also told, has been seeking help from the We Are With You service and is currently working as a concierge with Marriot Hotels.

“I am going to give you one last chance due to your age.”

Coulthard was tagged for six months, keeping him at home from 7pm to 7am.

He will be under supervision for three years with a conduct requirement to attend addiction services.

And Sheriff Brown ordered him to appear back before the court in two months for a progress report having been assessed by the Venture Trust employability service.