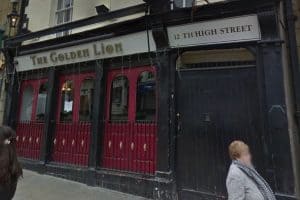 A pub doorman caused three breaks to a customer’s jaw and fractured teeth after dragging him to an alleyway and throwing the victim on the ground, a court heard today.

Judge Nicola Jones at Caernarfon crown court said the doorman was “horrified” at what he had done and she imposed a 19 months suspended jail term.

The defendant must pay £1,500 compensation.

Prosecutor Ember Wong said Mr Gask had been at the Golden Lion pub at Wrexham, drinking with his mother after shopping, and had been “merry.”

But they were asked to leave the pub.

The victim got up to do so and was heading to the exit when Jones grabbed him from behind and dragged him out. Mr Gask smashed his face when he was thrown onto concrete.

There was CCTV footage played to the court.

Miss Wong said it appeared the victim lost consciousness. He was taken to hospital and needed an operation.

Defence counsel Dafydd Roberts said Jones accepted his treatment of the customer that night was unlawful. He was doing a “difficult” job and his remorse was genuine.

Mr Roberts said Jones now worked for a road surfacing firm and it was unlikely he would appear before a court again.

Judge Jones told the defendant it had been the anniversary of the death of a security staff colleague. “Emotionally you were not in a place to make good judgements,” she said.

Mr Gask may have argued but Jones was trained to deal with such a situation without losing his temper.

The judge added: “These are dreadful injuries which would have been very painful.”

But Jones had shown genuine remorse and “high levels of victim empathy.”

He would never work as a door supervisor again.

Man jailed for biting Doormans ear, spitting it out part of it on the floor in front of him