A club doorman who caught and detained a rapist as he attacked an 18-year-old girl on Brighton beach modestly insisted today ‘I’m no hero – I was just doing my job’. 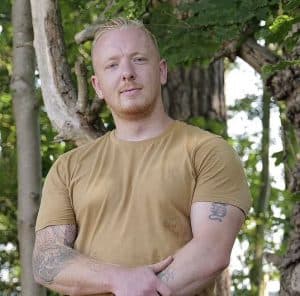 Bouncer Clive Read, 29, spotted something was wrong as patrolled the sands during his shift at VIP superclub Shooshh.

He caught rapist Abdenour Ben Ali, 30, red-handed as he found him looming over his half-dressed victim, who was face down in the stones.

Clive’s instincts kicked in and he called for help, his manager calling police, while he kept hold of Ben Ali.

They made sure the girl was okay and covered her with a blanket until officers arrived to take her attacker away.

This week his heroics were praised as Ben Ali was jailed for nine years over the brutal attack in court.

Clive, who lives in Brighton, modestly told MailOnline today: ‘I wouldn’t say “hero” is the right word for it, at the end of the day that is what we are there for – I was just doing my job.

‘We are there to protect the public, protect the staff, protect the venue and to police that seafront during the times when there isn’t a police presence or there aren’t lifeguards on the beach. To me, I was just doing my job, that is how I see it.

‘The club owner insists that two doorman walk the seafront every 20 minutes just to check. The perception of bouncers over the years is bad, especially in Brighton which has a big nightlife. Bouncers just get this branding that we’re just there to be horrible when actually we’re there to protect the public and the staff. We’re not there for any other reason.

‘The day he was convicted I was in a hospice with my brother – he had a brain tumour. He passed away two days after the sentencing.

‘To be honest the conviction surprised me, you normally hear about things like this and someone gets away with it. So for actually to have a proper conviction, that in itself is a reward to the girl.’

Hove Crown Court heard how plumber Ben Ali had met the teenager on a Friday night.

He encouraged the girl – said to be ‘vulnerable’ – to accompany him to the beach where he attacked her.

Police were called to King Road Arches near the Palace Pier at 4.30am on Saturday, September 7, 2019, the court heard.

Four door staff, who included Clive, were commended in court at the end of the trial by Judge Janet Waddicor.

Ben Hali has now been jailed for nine years and will be put on the sex offenders register.

Speaking of the moment he caught him, Clive said: ‘I went down onto the seafront as normal – as security officers we police the beach down there while we work at the nearby club, to help out Sussex police and to do them a favour.

‘As I started to walk back I saw something to the side of me and it was behind the carousels on the water’s edge. I started shining my torch there and I saw a couple. As I walked over, I realised it wasn’t a couple.

‘There was a female with her face head down in the stones. The idea they were a couple didn’t fit, you wouldn’t put them together as a couple, nothing added up.

‘I walked over and the guy went to walk off. I ran towards him, he froze and stopped. I held him and asked if the girl was his partner.

‘I asked ‘did he know this girl’ and he said he wasn’t doing anything. He was more interested in picking up his cigarette packet off the floor than anything else.’

He described turning his body-worn camera on and calling staff at the front door of the club for assistance. The manager of the club called the police in the early hours.

Clive added: ‘I took the guy to the police and covered the girl up with a blanket. I tried to move her away from the water’s edge because there was a rising tide. We just did what we had to do, tried to make sure the girl was okay and police officers cordoned off the area.’

Following the girl’s rescue, Clive received a handwritten postcard from Chief Superintendent Nick May which read: ‘Thank you so much for your work in intervening in a very serious sexual assault on the beach a couple of weeks ago.

‘You showed professionalism and clarity of thought. As Brighton and Hove Divisional Commander, I am very grateful for your intervention and for doing the right thing.’

Incredibly this is not the first time he has stepped in to be a hero.

In November 2015, when he was working at The Arch, he rushed into 8ft pounding waves during the height of Storm Barney to pull a young man who was trying to enter the sea, to safety.

Clive said: ‘I saved a guy when there was a big storm a couple of years back. The guy tried to kill himself and I was the doorman who jumped in to save him. It was a mad one, it’s been a mad couple of years.

‘The owners of the club where I work have given me every training I needed and wanted, they kept pushing, I wouldn’t have been as good a doorman if it wasn’t for them putting me through all this training. In 2014 they put me through a vulnerability awareness course looking out for things like that.