The Crown Court trial has begun into the Haverfordwest nightclub doorman accused of ‘grabbing a client like a doll’ before throwing him to the floor where he lapsed into unconsciousness. 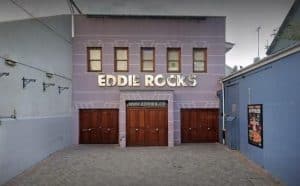 “He grabbed him like a doll, put an arm around his throat and dragged him backwards,” said barrister Thomas Scapens, for the Crown.

“He then lifted him from his feet and threw him by the neck to the floor.

“But the defendant claims he was acting in self-defence. As you can see from the CCTV footage, that’s a lie.”

The Crown went on to say that when police visited the nightclub to question staff about the alleged incident, “they were denied any information.

Ryan Lewis and his friend Callum Phillips had travelled to Haverfordwest from Neyland RFC to celebrate the first game of the season following a two-year break as a result of Covid.

On reaching Haverfordwest they had a few drinks in Wetherspoons before moving on to Eddies Rocks, where Mr Lewis drank several more pints of Carling lager plus a few shots.

“I remember feeling ill and being sick on the dance floor and again in the toilet, and that’s my last recollection,” said Mr Lewis during the first day of Skinner’s trial.

Because of his intoxication, Mr Lewis was asked to leave the nightclub and the CCTV footage showed him walking down a staircase ahead of Skinner and out through the nightclub’s main door.

But as soon as he stepped outside, he was seen being pulled backwards by the defendant who had his arm around his neck.

The defendant was then seen to lift him off the floor and carry him away from the doors towards the pavement, where he threw him to the ground ‘with considerable force’.

“The next thing I remember was waking up the following morning and going to A&E,” said Mr Lewis.

As a result of the alleged assault, Mr Lewis sustained swelling to his head, a cut to his knee and bruising to his underarm.

The alleged assault was also filmed by Mr Lewis’ friend, Callum Phillips, on his mobile phone.

“I began filming because I thought that what was going on wasn’t right,” he said.

“I didn’t think Ryan was being treated very well and thought the sensible thing was to get it on camera. But another bouncer grabbed me and used some force to stop me recording.”

Man allegedly punched and knocked out doorman at Skegness pub