More than 100 mourners gathered for a balloon release in memory of Caerphilly legend Gary Rees. Family and friends braved a downpour at Morgan Jones Park to pay their respects to the “true gentleman” doorman and lorry driver following his sudden death. 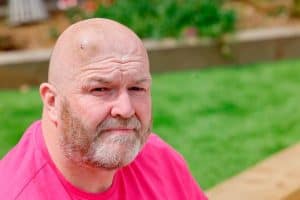 Gary Rees was badly hurt in Oakdale on July 4 when a HGV driver travelling on the wrong side of a road hit his lorry head-on, but he was able to leave hospital the next day and appeared to be recovering over the following weeks. The 55-year-old was interviewed by WalesOnline last Wednesday but died that night at his Caerphilly home. The cause is yet to be confirmed.

Gary’s wife Hayley and sons Macauley, 26, and Jorge, 19, were among those who paid tribute at the emotional balloon release on Tuesday evening, which saw blue love hearts fill the air.

Macauley said: “An hour before he passed he was literally bouncing around the living room on his crutches. He was taking the mick out of family members. It’s a lot easier to take when it’s expected but for it to be so sudden, that’s the worst part.

“Everyone loved him. He’s a massive legend of Caerphilly. I knew he was a very popular man but seeing the support has been absolutely amazing. I suppose there are happy and sad tears, but mainly happy because of the memories.”

Macauley revealed his dad was the inspiration for him setting up his own security company, where Gary went on to become an employee. “He worked on security in the Caerphilly Social Club for coming up to 30 years,” Macauley added. “If it wasn’t for him I would never have been able to set my company up.

Asked what made Gary special, Macauley said: “He was just always nice. I suppose doormen are sometimes labelled as aggressive but that was the very last thing he was. Not one person has had a bad word to say about him. I’ve had people message saying, ‘Your dad and I had little ding dongs in the past but he has always been been respectful.'”

Hayley said it was not in her husband’s nature to feel anything but compassion towards Mariusz Korkosz, who was jailed for 20 weeks after admitting causing serious injury to Gary by dangerous driving. “He would not want anything to happen to the other driver,” she said. “It’s just not how he was. Everybody loved him. I have been inundated with flowers and kind words since he passed away.”

Jorge described his dad as “a great man and a special character”. The 19-year-old added: “He would wind everyone up and he never stopped smiling.”

When Gary moved to the Churchill Park estate in the 1970s he met Colin Beach, who went on to be best man at his wedding to Hayley. Colin, a 57-year-old accountant, said: “We got on like a house on fire. The guy was a legend, a smile and laugh a minute. I would wind him up and he should have knocked me out for years, but all he did was have a bit of a grizzle and a second later a big smile would break out across his face.”

Colin grinned at the memory of his speech at the wedding of the “gentle giant”. He said: “I had the idea of putting him in a big mankini so I got one and took photos of him in it. When it came to the speech I did a slideshow with the pictures. We all had a great laugh.

“You can see what a legend he was from how many people have turned up today even though the weather is worse than expected. On funeral day Caerphilly will come to standstill. It will be a massive send-off. There’s not a venue in Caerphilly which could house us all. Look at the sentiment here today. It really makes me proud to know the guy.”

Geraint Griffith, who will direct the funeral, said family was “everything” to his close friend Gary. The 43-year-old said: “I used to say he was the gentleman of door staff. I never heard him raise his voice. That’s how he was, he talked to people with dignity. They could be hurling abuse at him and he would still speak to them with respect.”

When WalesOnline interviewed Gary last Wednesday, he said he had experienced severe headaches and leg pain since the collision on the B4251. He had sustained swelling in his skull and was awaiting a scan to show the damage to his right leg.

In the interview he spoke about his gratitude to emergency services who freed him from the lorry as well as the support he had received from friends and family. “I can’t thank people enough really,” said Gary. He also spoke about the sympathy he felt for Korkosz and his hope that the driver could “get his time done and get home”.

Following Gary’s death a fundraiser for his family was launched by security guard service Rubicon Wales, which posted on Facebook: “We have received the news that ‘our’ great friend and colleague, big Gary Rees, has passed away.

Gary has worked in this industry for longer than we can remember, seen more than any of us, done more than you can think of and today was his very last time. Gary was the definition of a true gentleman and one of the kindest men we had the pleasure of knowing.”

Some £4,965 worth of donations have flooded in to the Justgiving page, which you can see here.

Nightclub at risk of losing its licence, has been let off with a warning