A BOUNCER who allegedly attacked a gunman who pointed a loaded pistol at him walked free from court today. 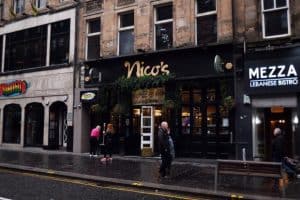 Smith pleaded guilty at the High Court in Glasgow in February 2020 to pulling out the Slovakian manufactured Grand Power self-loading pistol on Mr Bibby, of Paisley, Renfrewshire, and another bouncer.

Smith also admitted two contraventions of the firearms act and was jailed for five years.

The 34-year-old gunman had earlier been involved in an incident at the bar before telling the pair: “I am going to get a gun and shoot you.”

Smith returned moments later with the gun which he claimed he found in a park before being wrestled to the ground by the bouncers.

Mr Bibby was due to stand trial at Glasgow Sheriff Court for the single assault charge on Smith.

But, the matter was deserted after the Crown were unable to cite an important witness at the second calling of the case.

Alan Gravelle, defending, earlier told the hearing: “You can see this arises from the same incident from the High Court and with Mr Smith receiving a sentence, it demonstrates the passage of time we are dealing with.

“The High Court matter has been dealt with and my submission is the balance must be in favour of Mr Bibby.”

Prosecutor Darren Harty asked for the matter to be adjourned for a further date which was refused by sheriff Shona Gilroy.

Bibby had his case deserted and was free to leave the dock.