The G4S worker was delivering money to the bank on Prescot Road, Old Swan, when he was assaulted by three men armed with weapons. 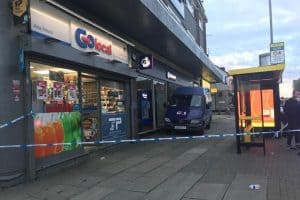 Witnesses at the scene say that the criminals were carrying a machete but this has not yet been confirmed by police.

The victim was left with injuries to his back following the attack and is in hospital.

The three thugs made off in a white VW Golf with cash they had robbed at around 7.20pm, on Monday, May 24.

An investigation is underway and a scene is in place.

Officers will remain in the area to carry out CCTV, forensic and witness enquiries and anyone with information is asked to get in touch.

Detective Inspector Craig Turner said: “We are carrying out a number of enquiries in the area after a security guard was injured during a robbery this evening, and I would ask anyone who has any information, to please get in touch.

“If you witnessed the robbery or a car matching the description in the area, please let us know. I would also urge motorists to check dash-cam footage and local residents to examine CCTV.

“To assault a man simply carrying out his job in this way is despicable and an investigation is now ongoing to locate those responsible.”