A MAN who assaulted a security guard at Furness General Hospital will serve a six-week curfew. 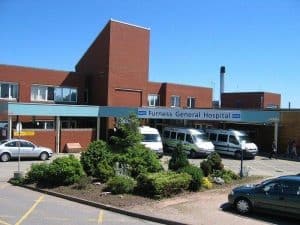 Andrew Nelson, of Parker Street, Barrow, struck security guard Ben Parker in the chest when he was a patient at the hospital on 19 December 2020.

Mr Nelson was admitted to the Barrow hospital after he attempted to commit suicide through an overdose.

During his stay in hospital, prosecutor Lee Dacre said Mr Nelson turned ‘aggressive’ towards Mr Parker, which later led to the security guard being assaulted.

Mr Dacre said: “The complainant in this case is employed as a security guard at Furness General Hospital.

“He was sat near a bedroom where Mr Nelson was a patient at.

“At around 9.15 in the morning he (Mr Nelson) became aggressive towards the complainant, and accused him of stealing his crack pipe and his money.

“He had a colleague with him and due to concerns the defendant was told to get back.

“The defendant then started flailing his arms around, striking the complainant in the chest.

“There will be no application for compensation as there were no sustaining injuries suffered.”

He explained: “Mr Nelson represents himself today as an individual with schizophrenia and mental health problems.

“He was admitted to hospital because of a suicide attempt where he attempted to overdose.

“After he came around from the effects of the overdose he did not know where he was and appeared to bolt to the door.