A young man took his own life just days before his birthday after struggling to cope with depression, an inquest heard. 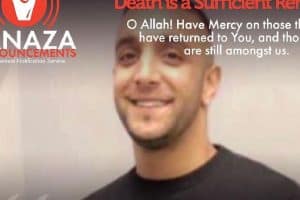 Bilal ‘Billy’ Ellahi, 27, was found in Chellow Dene wood, Bradford, on March 15, and died at the scene despite the efforts of police officers to revive him with CPR.

Today an inquest into his tragic death heard from Bilal’s auntie, Rabena Coser, who said her nephew had been living at the family home with his parents and was one of six siblings.

She said Bradford-born Bilal had attended Nab Wood School and Bradford College and had left without qualifications before going on to work as a restaurant waiter and then as a takeaway delivery driver.

He had then qualified as a security guard and been working at office buildings and shopping centres but, at the time of his death, had been furloughed.

She said Bilal had gone back to working as a delivery driver for various takeaways.

Ms Coser said Bilal had been married in 2018 but had unfortunately got divorced after six months due to differences with his wife about where they were going to live.

She said Bilal and his wife had sadly lost a child due to an ectopic pregnancy.

In the months leading up to his death, Bilal became withdrawn, spent hours on his phone, had only been eating one meal a day, and had lost a lot of weight.

In a statement, Ms Coser said: “He was spending a lot of time doing nothing and didn’t shower or change his clothes.

“His immediate family did not understand the reason, but he was clearly depressed and suffering from mental health issues.”

Whenever Bilal left the house, he would disappear for hours and his mum would be ringing up with worry, 20 to 30 times a day, the inquest aty Bradford Coroners’ Court was told.

At around 1am on March 15, he had sneaked out of the house. Later the same day, his family learned that Bilal had died.

Assistant coroner Crispin Oliver said that Bilal was ‘perceived to be depressed’ and had taken his own life.

He told the hearing, which was attended by Bilal’s brother Usman: “The conclusion I have to come to is that this was a suicide. I am sorry I have to do that but it is the evidence.”

Mr Oliver expressed his condolences to Bilal’s family for their loss.

Death of Wolves fan who was pushed by Doorman was accidental, jury rules