Officers were called to The Mixologist, in Church Road, Hove, popularly known as Misty’s, at 11.22pm following reports of several people fighting, a spokesman said. 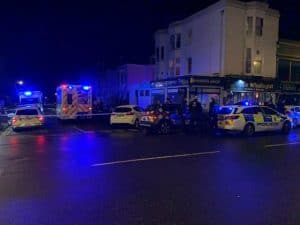 Two response security guards, who had also attended were attacked, a 29-year-old man suffering from a wound believed to have been inflicted with a machete and a 26-year-old man being knocked unconscious, police said.

Both were taken to the Royal Sussex County Hospital, Brighton, for treatment to their injuries, none of which were considered life-threatening, according to police.

All four are from Hove.

Detective Sergeant Duncan Lloyd said enquiries are continuing into what is being treated as an isolated incident.

Anyone who saw what happened or who may have other information concerning the incident, including CCTV or mobile phone footage, is asked to contact Sussex Police online or call 101, quoting serial 1534 of 18/02.

Alternatively they can contact the independent charity Crimestoppers anonymously, telephone 0800 555 111.