An alcohol delivery service has been granted a license to serve until 2am, making it a one of a kind business in the county. Beer Ambulance, set up by former club doorman Matthew Kneebone, has been operating for just over a year, delivering booze to people’s doors. 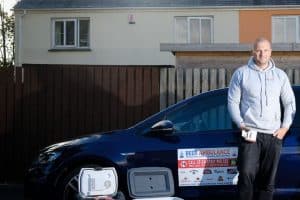 His patch of Camborne and Redruth, as well as areas towards Hayle and Truro, he said, has been well-served by him in that time, targeting alcohol-starved parties and people with barren beer coolers. Having been granted a 10pm license at first, Mr Kneebone’s Beer Ambulance has since been given permission to go later and later, now serving until 2am.

This, he said, means he can continue the work of preventing drinking and driving, as he explained last year: I have had people telling me it works. They tell me because I deliver, they don’t drive. People have admitted to my face – ‘If you weren’t delivering tonight, I’d have gotten in the car drunk’.”

Mr Kneebone explained that as far as he’s concerned, if people are going to buy alcohol anyway, they may as well do it safely. The former doorman was moved to starting up such a business after years of dealing with the drunk public.

Speaking after Cornwall gave him the late night go-ahead, he added: “I’ve worked really hard at this, and we’ve proven we can be trusted. We’re now the only alcohol delivery service which sells this late.

“I’m going to be doing tobacco and cigarettes too, and hopefully going to get on the Uber app soon as well.

“We promote non-drink driving, looking for more drivers who are loyal and trustworthy. We want people to be drink aware, drink responsibly – but we also want to be the premier late night alcohol service in Cornwall and to deliver fast.” Serving Wednesday to Saturday from 2pm-2am, and Sunday-Tuesday 2pm-midnight, Mr Kneebone said he has aspirations to go seven days a week until the early hours.

He added previously, explaining the precautions he takes: “I’m security minded. If I think you’re not handling it properly, I’ll refuse you service just like a normal shop. My site clearly says I am trained, and I have a no under-21s policy.”

His website, which can be found here, states the service is as strict and to-the-letter as any normal shop – requiring ID and offering card payments. Mr Kneebone hopes the quirkily-named business can expand to Cornwall-wide in the near future.