Former British boxing champion Julius Francis could find himself in deep trouble after punching a rowdy man outside BoxPark in Wembley. 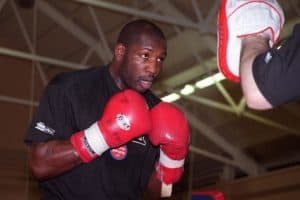 Francis – who won 23 professional bouts as a boxer – is now working as a bouncer after calling time on his career in 2006.

The 57-year-old has gone viral on Twitter after an altercation between a group of men and security staff, including himself, led to Francis knocking out a man outside of the north London venue.

In the footage, a man wearing a blue durag can be seen trying to fight while also swearing.

Francis attempts to calm the situation down but is unable to control the man who continues to shout and kick out before walking on to a punch by the ex-heavyweight.

“Police are aware of footage circulating on social media showing an incident involving security staff and a member of the public outside Boxpark in Wembley.

“An investigation into the circumstances, including to establish the identity and welfare of those involved, is under way.

“There have been no arrests and enquiries are ongoing.”

Francis is most known for sharing the ring with heavyweight icon Mike Tyson in 2000. The pair collided in Tyson’s first UK fight although it ended inside two rounds with Tyson winning.

The Brit also lasted the same amount of time inside the ring with Vitali Klitschko in 1998 but did win the British and Commonwealth titles in his career.

Since retiring from the sport, the Londoner has set up his own fitness company alongside working in security.

Francis has been in the headlines for the wrong reasons before though. In 2009, Francis was sentenced to 140 hours of unpaid work after road rage saw him punch a window through and spray the driver with glass.

‘One in a million’ Liverpool doorman dies suddenly