Five people have been arrested following a supermarket brawl that left several injured – and involved a man dressed as Spider-Man. 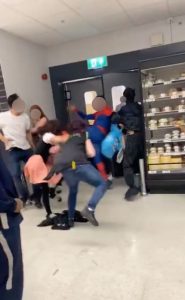 Video footage inside Asda’s Clapham Junction store paints a chaotic scene and appears to show punches being thrown and debris launched as violence erupted in front of shocked onlookers.

Six people received injuries in the bedlam, which saw ‘Spider-Man’ appear to go on a rampage through the store, repeatedly lashing out at customers and staff, the Mirror reports.

A sickening development saw a man in a wheelchair hit over the head with a heavy object and being punched by two men.

Shocked onlookers initially thought it was a social media prank as the group, which also included a man dressed as Ali G and another as Batman, confronted a lone security officer on the shop floor.

The man dressed as Spider-Man was seen shoving the worker in the fresh produce section, before shouting obscenities at another.

He then walks through a double door leading to a stock room, where a violent brawl unfolds.

The man is shown punching at least two staff members, including one on the ground, before battering rivals with a pole.

In another sickening scene, a woman in the group slaps a staff member, who responds by shoving her to the ground.

At this point the man dressed as Spider-Man emerges again, aiming a high kick at the supermarket worker before punching her in the face, causing her to collapse.

“Five people were arrested in connection with the incident:

“They were subsequently bailed to a date in mid-August.”

Enquiries into the circumstances are ongoing. Anyone with information about the incident is asked to call police on 101 or tweet @MetCC quoting CAD 7883/22Jul.