A FEMALE Door Supervisor has lifted the lid on the worst excuses she’s heard for club revellers breaking the law. 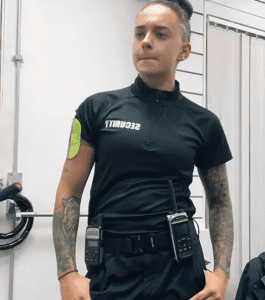 In one, she describes some of the most stupid things people say when she catches them doing something they shouldn’t.

Recalling the excuses, she wrote: “It’s not my drugs I swear.

“I’ve only had two drinks.

But she shared perhaps the worst bid to avoid getting into trouble in a separate video.

It was captioned: “When you find drugs during a search and they start saying they borrowed the trousers.”

She later explained how the security team deal with the contraband finds.

When asked where the illegal items go, she replied: “Disposal container for police collection.”

Blake also revealed how men often tell her she’s too small to do security.

She admitted the comment that annoys her the most is when people suggest that that women shouldn’t be allowed to earn a living doing what she does.

She posted a video with the quote “women shouldn’t be in security” and captioned it “forever getting said” below.

And in the comments Blake further clarified the remarks she was referring to when asked who had the cheek to say such things.

She said: “Too many small minded people, usually men.

“Get it quite often from men that get refused or ejected.”

And when someone suggested that small women shouldn’t be in security, she added: “Define small tho?

“Also, if you haven’t realised – 90% of the job is communication orientated.

“Physical intervention is and should be a last resort.”

Supporters were quick to leap to her defence and dismiss any sexist stereotypes.

One joked: “We’ve probably got more baws than half the men that do this.”

Another said: “My gf is security and is more game than half the guys she works with.”

While someone explained: “The best security officers I have worked with are female, least they are never shift fillers.”

You can read our study on Female door supervisors here