An ex-soldier threatened to kill then attacked a bouncer who refused him entry to a Scots nightclub. 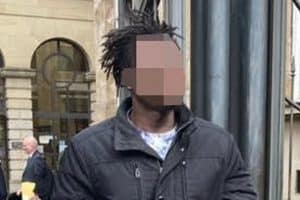 Pa Sarr reacted with fury after being knocked back by door staff at El Barrio in Edinburgh’s city centre.

The 34-year-old told the doorman he’d been in the Army and “knew how to kill”.

READ MORE: Suspicious Edinburgh woman ‘pretended to be on the phone’ seconds before stabbing

He appeared at the court on Wednesday to admit assaulting Sean Robinson and making threats of violence.

Fiscal depute Janet MacDonald said Sarr was refused entry when he turned up at El Barrio on Hanover Street.

Ms MacDonald said the accused told door staff “Edinburgh is a very small city and I will find you”.

The court heard Sean asked Sarr if he was making a threat.

Sarr replied that he “didn’t make threats”, said Ms MacDonald, and he added: “I will kill you”.

The court was told Sarr said “he’d been in the Army” and “knew how to kill”.

Door staff asked him to move back but he “lunged in the direction of a customer” trying to get into the club and Sean intervened, the prosecutor said.

Sarr was later traced by police as his photo had been taken during the incident on August 29 2019.

Defence agent Victoria Good said her client suffered from PTSD following his Army service and he was “medicating with alcohol”.

Ms Good said Sarr wasn’t receiving help for his condition at the time, and had only a “vague recollection” of events outside the premises.

Sheriff Kathrine Mackie deferred sentence on Sarr, of the city’s Leith area, for six months for him to be of good behaviour.