Ryan Moore was thrown out of Bar Salsa in the city centre after a fight broke out between two groups of men in the bar. 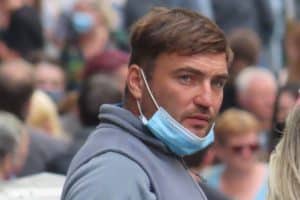 An Edinburgh builder who punched a doorman during a pub brawl was caught by police thanks to a social media post.

Ryan Moore was involved a violent disturbance between the groups at Bar Salsa in Edinburgh city centre in March 2019.

Moore, 34, had been ejected from the premises by the pub’s door staff and when outside in the street he was said to have “removed his jumper and displayed a fighting stance”.

Moore then punched a doorman to the face as the fighting between the two gangs spilled out onto the street.

Police attended to deal with the melee but Moore had moved away from the area before being identified.

The builder, of the city’s Gilmerton, was then tracked down six months later after he was identified by a Facebook post.

Moore pleaded guilty to assaulting Mr Ross by punching him at Bar Salsa, Cowgatehead, Edinburgh, on March 2, 2019, when he appeared at the capital’s sheriff court on Wednesday.

Prosecutor Sarah Quinn said the fighting between the two groups erupted inside the bar at around 9.50pm.

Ms Quinn said door staff intervened and Moore was being forcibly moved from the situation.

And while in the street he challenged Mr Ross and swung the punch that connected with his face.

Solicitor Nicola Haston, defending, said her client was a self-employed builder who employed five workers and he lived with his pregnant partner.

Ms Haston added Moore had been “drinking excessively” and that he admitted his behaviour that night had been “unacceptable”.

Sheriff Adrian Cottam said: “You will appreciate all Mr Ross was doing was trying to sort out the mess in the pub and he didn’t deserve to be punched.

“Luckily he didn’t appear to be injured and I will order you to pay him compensation.”