A security guard from the Black Country is celebrating after winning a £250,000 top prize on the National Lottery’s Multiplier Orange Scratchcard. 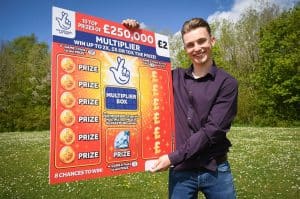 And it was on the same day 21-year-old Luke Ashman went on a first date – having waited until the lockdown rules allowed for a trip to pubs and restaurants.

Mr Ashman, from Dudley, said: “I had the day off from work and even though I was supposed to go food shopping I fell asleep on the sofa.

“When I woke, I dashed to the supermarket because not only had I got to get the groceries, I had my first proper date that evening with a girl I had recently started seeing.

“Even after my daytime nap, I was still tired, so I bought myself an energy drink and while at the counter I bought a couple of National Lottery scratchcards.”

When he got back to his car, Luke decided to look at the scratchcards to see if he had been lucky.

He said: “I scratched one with no luck. I then tried the second and scratched a diamond, then a win symbol – I saw £250,000 but wasn’t sure whether it was a full stop or a comma.>

“When I double checked and saw the amount and I had won the top prize my heart was thumping and I literally started to shake.

“I somehow drove home, stumbled along the drive, opened the front door and started to shout out to whoever was home. I was met by my mum who was worried having heard me call out, thinking I had been in an accident.

“We checked over the scratchcard together before I then called the National Lottery to check if I had won and that I was £250,000 richer. I immediately called my dad and messaged my three brothers with my amazing news.”

After all of the excitement Luke had to focus on his date.

Luke said: “We have been speaking and seeing each other since the beginning of the year but obviously haven’t been able to go out on a proper date. She normally catches the bus home from work, but I went to pick her up and couldn’t wait to tell her my news.

“She didn’t believe me at first until I showed her the winning scratchcard.

“That night we went out for a meal, I ordered a bottle of Prosecco and we celebrated an amazing day of both a lottery win and a first date.

“You could say I had won twice in one day.”

Luke currently works as a loss prevention officer at TK Maxx. Having been furloughed at times throughout the last year, he juggles the job with his studies as a final year criminology degree student at the University of Worcester.

Luke has a long-term plan for the money – but first wants to treat himself to a new car, a Ford Mustang. The rest of his winnings will go towards setting up his own property development business.

Asked about possible celebrations Luke added: “It’s my birthday in a couple of weeks. It’s then my dad’s 50th and my three brothers have special birthdays too, so we will wait until after June 21 to get together with lots of family and friends and have a fantastic party.”

Luke is the second lucky National Lottery Scratchcard winner from the Black Country in the past few weeks. Bee Murton from Bilston celebrated winning £300,000 at the end of April on a Lucky Numbers Scratchcard.