A CHESTER bar doorman was left with a split forehead so bad it went to the skull bone after being attacked by a drunken teenager. 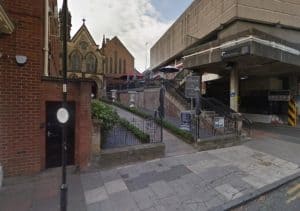 Orig Williams, 19, pulled doorman Merryl Roberts to the ground face first after being ejected from The Church bar in Chester city centre on July 27, 2019.

Chester Crown Court heard on Tuesday, July 21 that Williams had travelled from North Wales to Chester with friends with the intention of going to Chester Races, but with the weather being so bad it turned into a pub crawl around the city.

Prosecuting, Dafydd Roberts said it was about 6pm when security door staff at The Church saw Williams shouting at a group of people inside.

He was told to leave and initially Williams walked off calmly, before returning in an aggressive manner.

He struggled with staff and Williams pinched the skin of Codey White.

Door staff picked up Williams and carried him outside.

Williams tried to go back inside and CCTV footage captured at the bar gates showed him pulling doorman Mr Roberts to the ground.

CCTV footage played to the court showed Mr Roberts fall head first on to the road. Williams then continued to kick out at him while the doorman was on the ground.

Before being detained, Williams also grabbed at the testicles of Dominic White and bit his left leg.

Photos of Mr Roberts’s injury were shown to the court, which revealed he had a 7cm by 5cm wound to the forehead which was so deep it revealed the skull bone.

Another photo showed Mr Roberts’s face had swollen from the injuries.

Williams had six previous convictions for 15 offences, but nothing for any violent offences since he was aged 13.

A victim impact statement from Merryl Roberts said he was unable to care for his two-year-old child as he didn’t want them to see him injured.

He had suffered problems with sleeping and could not understand why anyone would want to attack him in that way.

He was concerned about the scarring effect the injury would have.

Defending, Simon Killeem said Williams was 18 at the time of the offence and had made a lot of progress in growing up in the past few years, following a difficult upbringing.

He was a father in a stable relationship and, if he was to be put into custody, it would be for the first time.

Judge Berkson said Williams had gone along with friends on a works outing to Chester Races, but the weather was so bad they made the decision to “tour the city, pub after pub after pub”.

He added Williams “must have been told” to go away from the bar after being ejected by door staff, but he “made every effort” to go back in.

The facial injury was “serious” and had left the victim “marked for life”, but Williams had continued to try and kick the doorman while he was on the floor, although Williams was unsteady on his feet.

Williams’s behaviour was aggravated by it being at a difficult time for the door staff, with it being on a Chester Races day when people are leaving the racecourse, and the assault happened in full view of members of the public.

Provoked doorman left man ‘flat out’ in Swansea street, ordered to carry out 30 days of a rehabilitation activity and 175 hours of unpaid work