Gareth Gadsby was given a total of 20 weeks imprisonment. 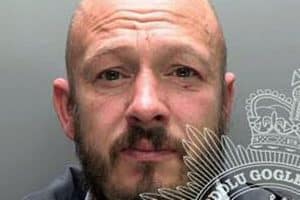 A “drunk” defendant who assaulted two security guards on his way into court has been jailed.

Gareth Gadsby was said to have been drinking because of personal problems including having had a tumour removed from his chest during cancer treatment.

But a court heard he had had several chances to rehabilitate himself after previous offending, and Caernarfon Magistrates activated a suspended sentence. He was jailed for a total of 20 weeks.

Gadsby, 41, of Y Garth, Llanerchymedd, pleaded guilty to two counts of assault against security guards Chris Howarth and Edward Jones at Caernarfon Justice Centre in an incident on November 4 this year. He also admitted using threatening or abusive behaviour.

Prosecutor Diane Williams said Gadsby arrived at the building that day for a hearing but was told by staff to keep the noise down.

He demanded that his case be heard and became abusive. He was under the influence of alcohol, was asked to leave, and was escorted outside by two security officers.

But Gadsby hit Mr Howarth on the arm and pressed his head against Mr Howarth in a “threatening head butt” but without actually headbutting him.

Staff left his belongings on the ground for him to collect.

Minutes later, the court heard, Gadsby returned to the court building. This time, Mr Jones escorted him outside, but Gadsby “lifted his clenched fist” towards the security guard.

Soon afterwards, Gadsby made his way towards Caernarfon town centre and was seen lying on the ground near a roundabout a few minutes’ walk from the court.

The court heard that an ambulance crew was called and found him “clearly intoxicated”.

Police were alerted but he told officers to “f*** off”.

He had been “heavily intoxicated” on November 4 but hasn’t had alcohol since November 5, she said.

She suggested that he drank because he has not fully dealt with the trauma of cancer treatment when he was younger. Aged 19 to 22, he had had 12 months of chemotherapy before an operation to remove a tumour from his chest.

Ms Tennant-Davies said “a mass of two and a half kilos was taken out of him”, and for 10 years he had had scans to ensure the cancer has not returned.

The court heard Gadsby had committed several offences in that time.

A probation officer said he had completed only one out of 160 hours of unpaid work set for him, and rehabilitative measures were already in place.

He also ordered Gadsby to pay each officer £50 for their distress, and a £28 victim surcharge.

He was also given a three-year Criminal Behaviour Order.

Conditions include not to consume alcohol from an open container in Wales or England unless on licensed premises. He is also prohibited from refusing to leave shops on Anglesey or in Bangor if asked to do so.

Manchester nightclub given reprieve after fights and doorman stabbing