A mum was attacked and had her £800 phone robbed as she filmed two doormen who wouldn’t let her into a bar for being “too ugly.” 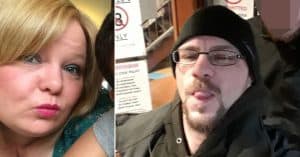 Claire Sidebottom, 39, from Tameside, began recording the bouncers on her mobile and threatened to report them for their ‘bullying’ behavior after being denied entry to the venue in Manchester city centre.

The mother-of-one was then grabbed by her handbag strap and forcibly pulled into a safety barrier, dropping her phone in the process.

It was picked by one of the doormen and she never saw it again. The court heard it was handed to a hooded man who ran off with it through Piccadilly Gardens.

One of the door staff, Christopher Cash, 33, from Stockport, was later found in possession of two kubotans – a weapon used in Martial Arts.

He has now been ordered to do unpaid work and to pay Miss Sidebottom compensation by a judge who said Cash had ‘abused’ his position ‘to deprive her of the evidence of his behaviour’.

He has since resigned from his job on the doors of Bar Rogue on Portland Street.

The other doorman died unexpectedly before he could be charged., the court heard.

Miss Sidebottom, from Mossley, said the theft meant she was unable to be contacted by the hospital who were treating her poorly young son, and said that the phone also contained personal sentimental photographs.

She said she had lost faith in door staff and did not want to go out in Manchester City centre again.

After the case, she said: ”I’m glad this man’s been punished even though I don’t think what he got enough.

“He was a doorman and he was there to protect people not to bully, assault and rob”

”It has been my first bar crawl for a while and I felt targeted and bullied and felt hurt because people were laughing with him. That evening I only went out to take my mind off what was going on around me at the time.

”I can’t even go out around town anymore now without me feeling another bouncer will hurt me.

“This man took my phone that had sentimental pictures of my baby that I can never get back.

“He took memories away from me.”

The attack happened on February 7 last year, the court heard.

”The defendant was a doorman at the time and Miss Sidebottom was on a night out and was queuing to get in,” Andrew Evans, prosecuting, said.

“She encountered Mr Cash and his colleague but she recalls she was refused entry because staff said that she was too drunk and a dispute arose.

“During that time, she recalls them saying she was too ugly to be let in so she decided to record their behaviour on her mobile phone, asked for their names and threatened to send the footage to head office.

“She then recalls one of the doormen grabbing her phone from her hand but she was able to grab it back.

“She asked them why they thought they could take this but then recalls one of the males coming at her through the barrier, causing her to drop the phone.

“She recalled falling to the ground and the doorman saying ‘grab it and run’ to someone nearby. he looked up to see someone dressed in black running away and she never saw the phone again.

“CCTV shows Cash trying to grab the phone by reaching over the barrier, he then grabs hold of her bag and there is a physical confrontation.

“The bag is around her neck and she was forced forward a few steps into the metal barrier. She fights back and gets back her mobile phone. But the other doorman then parts the barrier, steps towards the complainant and grabs the phone causing her to drop it

“Mr Cash picks it up and quickly moves out of the way and goes back inside the bar. During this period Mr Cash walks directly towards a hooded person who had been hanging around up the street. He hands the phone to him and the hooded man runs off across Piccadilly Gardens.”

He was also ordered to pay Miss Sidebottom £1,000 in compensation.

In a basis of plea, Cash said he assaulted Miss Sidebottom when he lunged through the barrier dragging her forward by pulling the bag around her neck. He then stole her phone which had been dropped on the floor and handed it to an unknown hooded man.

Officers recovered one kubotan from Cash’s jacket pocket following his arrest and seized another when they searched his bag in the police station.

Anna Chestnutt, representing Cash, said in mitigation: “He is a conscientious gentleman who does feel bad as to what happened to Miss Sidebottom.

“He says she did not deserve to be assaulted and the phone should not have been taken.

“He understands she deserves to be compensated.

“He resigned from his role as a doorman as he felt that was a good thing to do to prevent this from happening again.”

Passing sentence, the judge Mr Recorder Daniel Prowse told Cash: “You were working with a colleague when Miss Sidebottom was refused entry to the bar as she was told she was too drunk.

“She recalls being told she was too ugly to be let in.

“She recorded the behaviour of you and your colleague on her phone asking for your names and threatening to send the footage to head office.

“It would seem it was that which prompted the offending that followed.

“She recalls one of the doormen grabbing the phone from her hand and another coming through the barrier, which caused her to drop her phone.

“You were the one who first came towards her and pulled her.

You took the phone from the floor and you handed it to someone who left with it. It seems to me the purpose was to deprive her of evidence of your behaviour.

“You abused your power as a door supervisor in relation to her.”