Police and medics rushed to The Swan Inn in Gospel End Street, Sedgley 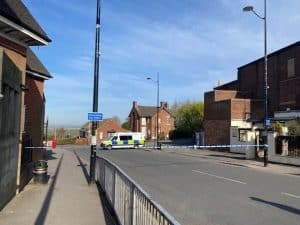 A doorman was stabbed in the stomach outside a pub in Sedgley.

Emergency services were called to Gospel End Street after a ‘dispute involving a group of men’ broke out at the entrance to The Swan Inn on Friday, April 23.

Medics treated the bouncer – who is in his 60s – at the scene before taking him to hospital for further treatment.

His injury is not believed to be life threatening.

Ettymore Road has been cordoned off following the shocking incident, with police remaining at the scene this morning – as can be seen in the video above.

West Midlands Police has urged anyone with information that could assist the investigation to come forward.

A spokesman for the force said: “We’re investigating after a security guard suffered a stab wound outside The Swan Inn, Gospel End Street, Sedgley, at about 10.20pm yesterday.

“The man, in his 60s, was taken to hospital for treatment to an injury to his abdomen which is not believed to be life-threatening.

“We’re in the early stages of the investigation but it is understood that there was a dispute involving a group of men at the entrance to the pub.

“Officers remain at the scene and are reviewing CCTV footage as we seek to trace whoever is responsible.”

Anyone with information can contact police via live chat at www.west-midlands.police.uk between 8am and midnight.