A DOORMAN who was stretchered out of a town centre venue after he was assaulted says he was abused and shamed by fellow door supervisors. 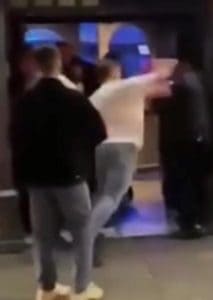 The man, 28, said he was “booted in the ribs” and kicked in the chest after rushing to the aid of a colleague who had been pinned to the floor.

The assault involved three drunk customers and unfolded at the fire exit after one of their number was asked to leave.

The doorman said after the incident was over, he went back into the venue.

“The next thing I can remember is coming around in the ambulance on oxygen,” he said.

“From what I could piece together afterwards, someone saw me start to go and said I was struggling to breathe.

“I had to fill in the gap after I left hospital.”

He has suffered muscle and soft tissue damage, leaving him struggling to play with his one-year-old son.

The doorman said the most serious impact had been the deterioration in his mental health.

He said he had received texts from colleagues at other town centre bars subjecting him to abuse, shaming him for suffering injuries while working.

He said: “One of them said ‘you’ve let your team down, curling up in a ball and acting like that.’

“He followed on saying ‘did you stop there? You got stretchered out ofthe venue and telling people you died en route to hospital’.

“That part came from the ambulance crew, who told me they resuscitated me, but I found out later from the hospital I was only struggling to breathe.

“Another called me ‘a disgrace’.”

The doorman said he has been unable to face working in the town centre since the attack.

The attack took place at a bar in Head Street, on Thursday, September 2, just days before mobile phone footage captured a brawl erupting outside a venue in the same street.

The fight, which took place on Saturday, September 11, resulted in a man, aged in his 30s, suffering a suspected fractured eye socket, broken nose and broken hand.