A NIGHTCLUB doorman has told young women who fear being injected with date rape drugs to “take responsibility for themselves”, adding: “We are not your personal babysitters”. 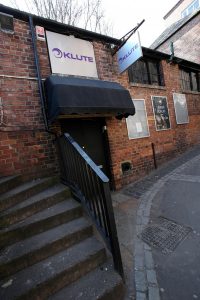 Dan Thompson, head of security at Klute in Durham, made the controversial comments at the weekend in response to a student’s claim she was ‘spiked’ at the club last week.

The Durham University student said she reported a red mark on her back after being spiked to bouncers at the club, but said she was subjected to ‘gaslighting’ and told it ‘had not happened’.

The woman wrote on the Overheard at Durham Uni page on Facebook and described how the experience has left her extremely upset.

Fellow students were sympathetic, but Mr Thompson joined the discussion and dismissed her claims, prompting Mary Foy, Durham City’s MP, to say she will take the issue up with the club – once dubbed the ‘worst in Europe’ – and Durham Constabulary.

Mr Thompson wrote: “The lady who was alleged to have been spiked left the venue with her friends and after being checked by door staff, walked down under the bridge and then came back inside the club shortly after and remained fine.

“There was zero signs of her being spiked or being too drunk.

“She left with her friend and walked out perfectly fine so this for me it is a false claim this happened in Klute.”

Students joined the thread and suggested the club should have metal detectors but Mr Thomson said this was ‘overkill’.

He then went on to write: “You guys are spiking each other.

“It’s your responsibility to safeguard yourself against these kinds of behaviours, but, as per, drunk students look to blame anyone they can for an easy way out.”

But he added: “We are not your personal babysitters.”

In response to suggestions Klute’s security on the issue of spiking was ‘wanting’, and heavy criticism of his stance, Mr Thomson told students they ‘zero clue’ what they were talking about.

He also said he would be making a formal complaint to the university against anyone who wanted to ‘slander’ him or his door staff.

He wrote: “Don’t like the way we do things, don’t come to the bar.”

Mr Thompson said pictures of those commenting were being ‘screen shot’ and passed to all bars with warnings that ‘you will slander any bar and door staff if they don’t believe your lies and deceitful cruel false allegations’.

Mr Thompson said: “Top and bottom, you leave your drink unattended that’s down to you, not us door staff or the venue.

“You’re responsible for yourself so start taking responsibility for your actions.

“No drink should ever be left unattended regardless of where you are.

“You’re acting like this hasn’t been a thing for a long long time.

“Guess what, it has. Guess what also, a lot of these alleged spikings has just been students who have drank too much.”

It came amid reports around the country of people being injected with date rape drugs.

A Durham University spokesperson said: “The health, safety and wellbeing of our students is our first priority.

“We work with partners, including the police, council and health service, as well as student leaders, to help our students stay safe.

“We continue to support students affected by spiking by offering welfare and pastoral support, signposting to specialist services and, where appropriate and where they wish us to do so, working with those subjected to spiking to report any spiking incident to the police so this can be investigated.”

In her post the woman, who is not being identified by the Northern Echo as she is a potential victim of crime, said she had been to the police and was undergoing medical tests.

Durham City MP Mary Kelly Foy has said she will be taking the matter up with the police and Klute night club.

She said: “It is worrying to hear about more spiking incidents occurring in Durham.

“I’ll be liaising closely with Durham Constabulary and the owners of Klute over the coming days to see if I can assist in establishing what happened to the individual who reported the issue to the door staff.

“During times of heightened concern around the safety of young women, I would expect that employees of any establishment would be understanding and sympathetic should a distressed individual approach them for support.”

Earlier this week Durham City Safety Group said it has received over £100,000 in Government cash for projects to protect people, mainly women and girls, out and about in Durham.

Alan Patrickson, Durham County Council’s corporate director for neighbourhoods and climate change and chairman of the Durham City Safety Group, said: “We do take any reports of spiking extremely seriously and have visited several licensed premises alongside Durham Constabulary in recent weeks to raise awareness and offer advice to help everyone stay safe during a night out.

“We would encourage anyone who believes they have been a victim of drink spiking to report it to police and seek medical attention.”

A force spokesman said: “A 19-year-old woman has reported to police being spiked by injection at a venue in Durham City on November 17.

“Detectives are investigating the incident and enquiries are ongoing.

“Drink spiking is a serious offence and we would urge anyone who believes they have been a victim to seek immediate medical attention and report the incident to police.

“We are currently working with partners in both the public and private sectors to develop a number of practical measures, including a night safety hub and awareness training for those working in the night time economy, designed to improve how safe people feel in Durham”.