A doorman has been jailed for killing a student doctor with a single punch when a fight broke out where he worked. 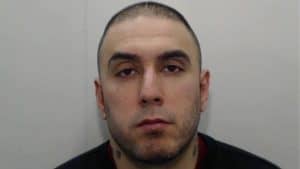 Nojan Kafi, 36, hit Emmanuel Simon, 33, on the head, causing him to fall to the ground and lose consciousness at Dubai Café in Rusholme in January 2020.

Greater Manchester Police said Mr Simon, who was acting as a peacemaker, lost his life in a “moment of sheer brutal recklessness by Kafi”.

He was jailed for four years and eights months at Manchester Crown Court.

Kafi, of no fixed address, had previously been charged with his murder but the court accepted his guilty plea to manslaughter.

The court heard Mr Simon had been at a wedding celebration before going to the Dubai Café with some friends.

At about 05:00 GMT, a disturbance broke out inside the venue and spilled out onto Wilmslow Road with Mr Simon trying to be peacemaker.

Detectives said a bouncer at the café, later identified as Kafi, punched Mr Simon once in the head.

Mr Simon, who had moved from Eritrea in Africa to Manchester to study to become a doctor, died just over two weeks later in hospital on 10 February 2020.

Kafi later handed himself into police following a CCTV appeal to identify his killer.

Two other men have also been convicted of violent disorder in relation to the incident and a further three men are due on trial in September charged with the same offence.

Det Ch Insp Carl Jones said Mr Simon “had come to Manchester for a better life” but this was “so cruelly taken away from him by a moment of sheer brutal recklessness by Nojan Kafi”.

“Sadly, we see far too often the devastating impact of one punch, one moment of lethal violence that can have such tremendously damaging – and ultimately fatal – consequences,” he added.

Paying tribute to Mr Simon at the time of his death, his family said he was “a gentle giant, easy going, quick to smile and loved life”.

‘I will cut you up’: Serial offender stabbed shopping centre security guard in ‘frenzied’ attack