A York bouncer has been found guilty of two counts of causing actual bodily harm following a ruckus with a group of men outside a bar in the city centre. 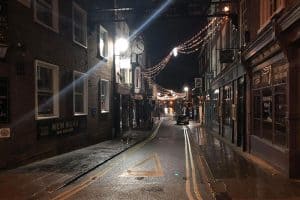 Jon Ward, 29, flung one man to the ground and punched another repeatedly during the brawl in Fossgate, which was described as a scene of “absolute chaos and violence”.

At least two of the men were injured in the scuffle which began when Ward, who was working on the door of The Terrace, approached one of them following an altercation amid heightened tensions outside the bar, a jury at York Crown Court heard.

CCTV footage of the incident showed Ward push one of the men from the pavement into the road and then throw him to the ground. The victim’s friend tried to intervene, but he was punched repeatedly while being held him in what appeared to be a headlock.

That man was knocked to the ground, landing on his back, in the middle of the road, said prosecutor Rachel Landing.

At one stage, one of the men appeared to grab Ward around the neck from behind as the bouncer fought the other victim.

Ward claimed he had acted in self-defence following provocation from the men outside the bar in the early hours of February 23 last year.

But following a week-long trial, the jury found him guilty of two counts of assault occasioning actual bodily harm. He was found not guilty of a third allegation that he caused another named man grievous bodily harm.

The CCTV footage, which was played in court, showed some sort of altercation between four doormen, including Ward, and three men outside the front entrance to the bar.

“Words were exchanged” as one of the doormen tried to usher one of the men away from the bar.

Ward claimed the men “looked like they were about to do something to my team (of doormen)”.

He claimed he saw one of the men throw a punch at someone, at which point he moved towards the group, trying to move them away amid lots of shouting and swearing.

During the ensuing melee, Ward claimed he “panicked” when one of them grabbed him around the neck and he “responded” because one of the men had hold of his back or arm.

But Ms Landing said that Ward was the aggressor and turned the situation “into absolute chaos and violence”.

She said that Ward was “not under any threat at all” from the men.

Ward, of York Road, Skipwith, will be sentenced on December 8.

Man high on drugs spat on security guard at Glasgow shopping mall, given 163 days in prison