A BRADFORD man has been fined after admitting he worked as a doorman at a popular city centre nightclub for months without a licence. 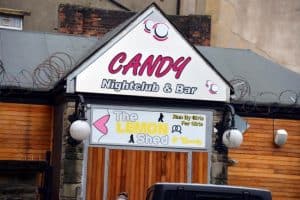 Abas Ali Shah had worked on the doors of Candy Nightclub on Sackville Street on 30 occasions in a period when he did not have the proper licence.

When he appeared before Bradford and Keighley Magistrates Court this week, he said his licence had expired but he could not afford to pay £250 to renew it.

Shah, of Leeds Road, had been charged following an investigation by the Security Industry Authority (SIA) – the body responsible for licensing security guards, door staff and CCTV monitors.

– failing to provide documents when required to by the SIA.

The authority had been tipped off that an unlicensed door supervisor was being used at Candy Nightclub.

After investigating, they found that the man in question had been supplied to the club by a security firm.

Peter Rollins, prosecuting on behalf of the SIA, told magistrates that Shah had a licence to do the job – but that this expired in October 2018.

He continued to work at the nightclub while the licence was expired.

He eventually successfully renewed his licence on April 2019 – six months after it had expired.

Magistrates were told that the licence process allowed the Authority to keep checks on whether door supervisors were “fit and proper” people to hold the position.

Shah, 40, represented himself in court, and was asked why he had not renewed his license.

He replied “I was suffering financially at the time.

“I didn’t have the means to pay for it.”

Magistrates were told that it would have cost £250 to renew his licence.

When asked if he had realised the consequences of working as a door supervisor without a licence, he replied: “Not at the time.”

Mr Rollins was asked about Shah’s future as a doorman now he had a criminal conviction.

He responded: “It is unlikely he will retain his licence.”

He will also have to pay £675 to cover the costs of the SIA investigation and prosecution.

He was also ordered to pay a £32 surcharge.

lEstablished in 2003, the SIA is the regulator of the UK’s private security industry.

It is an executive non-departmental public body, sponsored by the Home Office.

It was created by the Private Security Industry Act 2001.

It also sets and approves standards of conduct and training, monitors the activities of people operating within the private security industry, and makes recommendations on ways to improve standards.