Scott Hunter was assaulted by reveller in Cramlington, Northumberland, who tried to claim he was acting in self-defence. 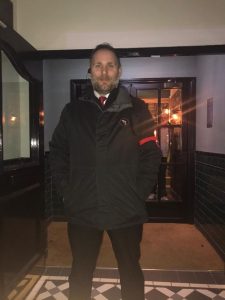 A bouncer who was assaulted by a drunken reveller as he tried to remove him from a pub has today lifted the lid on the stigma doormen face.

Scott Hunter says he felt like he had to defend his profession when giving evidence in court against thug Stuart McDonald, who punched him in the jaw in Cramlington village.

McDonald tried to argue that he had acted in self-defence when he hit Scott and one of his colleagues at The Blagdon Arms pub.

But he was found guilty of two counts of assault by beating after a judge rejected his claims that the doormen had been heavy-handed with him.

And today Scott has told how doormen are constantly fighting against the assumption that they are aggressive thugs that want to start a fight.

The 35-year-old said: “Door supervisors have had a reputation from the year dot of them existing. A lot of people who go out and have a drink think a doorman will want to have a fight, but that’s not the case at all.

“It sounds corny, but all it takes is one person standing up and trying to prove that we are just people doing a job.”

Scott, from Blyth, Northumberland, trained as a door supervisor after leaving his sales career behind.

He got a job with Phoenix Security last summer and was sent to work as head doorman at The Blagdon Arms.

South East Northumberland Magistrates’ Court heard how Scott and his colleague Mark Miller were both punched by McDonald after escorting the drunk 25-year-old from the bar in August last year.

McDonald, who denied the attacks, said Scott had made derogatory comments about his ginger hair and described Mr Miller as having a “mean face” during his trial.

But after hearing how McDonald had been so drunk when he was arrested he told police he could not remember what had happened, the judge dismissed his claims of self-defence and found him guilty.

Scott said that while the attack was unusual, it was not uncommon for drinkers to act aggressively towards doormen.

“You do get a lot of aggressive people all the time. It’s just the nature of men going out drinking. They have one too many and think they turn into He-Man,” he said.

“For me, the assault itself was quite unusual. It was the first time I had been assaulted while working. But it made me feel proud in a way that he was assaulting me and not someone inside the bar.”

But the dad, who gave evidence during the trial, admitted that he did feel as if he had to speak up for his profession while on the witness stand.

“Everyone sees doormen as being thugs,” he said. “And the best form of defence for anyone in an assault case is to play the self-defence card.”

Scott said the incident had made him more determined than ever to change the out-dated negative perceptions the public might have about people working on the doors.

“It is something that comes with the job,” he said.

“I have got a family, I have a daughter and a baby on the way, I really don’t like fighting. It’s not in my nature. I would rather sit and talk to somebody.

“Part of our training is in negotiating. Any physical contact is always the last resort.

“What a lot of people don’t realise about doormen is it’s a customer relations role. When you are stood on the door you are the first person a customer sees when they come into a bar and the last person they see on their way out.”

But Scott added that all door-staff were trained to remove people from bars safely when needed.

“The training that you do is called ‘physical intervention training’ which is all about how to safely remove people while using minimal force.

It was a three-day training course,” he said.

“It’s not just for the safety of other members of the public, it’s for the person you are escorting out’s safety as well.

“When you have your hand on someone’s back if it is even an inch out of place it can damage the spine. It’s the same training that NHS staff get.”

McDonald, of Newlyn Drive in Cramlington, was ordered to pay a total of £970 in fines, court costs and compensation.

And in delivering his verdict District Judge Paul Currer warned McDonald about his drinking.He said: “The problem with your behaviour that night was simply that you drank too much, far too much.”

Guilty verdict for boss who supplied unlicensed security to school