A DOORMAN and a police officer have been presented with certificates for saving a man’s life in Stourbridge. 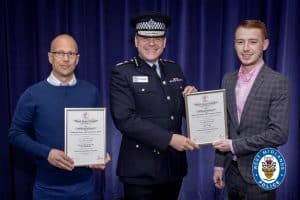 Adam Partridge and PC Leigh Alexander were presented with certificates from the Royal Humane Society for their actions in saving a man’s life following an incident at the Old Crispin Inn June 12 last year.

Doorman Adam Partridge was on duty at the Church Street pub when one of his team were assaulted at 2am.

The man who attacked his colleague then punched out a hole in the pub’s window causing a deep cut on his arm.

Adam, from Brierley Hill, used his first aid training to care for the man who was bleeding heavily and he was joined by PC Leigh Alexander who had responded to the assault.

They cared for the man until paramedics took over and doctors said that the patient would have gone into cardiac arrest if it had not been for their actions.

Leigh and Adam were presented with their awards by Chief Constable Sir David Thompson at an awards ceremony on Tuesday March 15.

The Royal Humane Society is a charity that gives awards for acts of bravery in the saving of human life.

Certificates of commendation are presented to people who have made a significant contribution to the saving or attempted saving of a life.