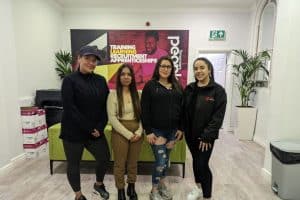 The Commonwealth Games are in safe hands after it was revealed security firm GMS Group will offer 250 people the chance to work at the Games this summer. GMS Group has been supplying security services in Birmingham and across the UK for over 20 years and is now actively encouraging more women to apply for roles in security by offering training and licencing support for successful applicants.

Sandwell College is collaborating with GMS to provide the training applicants will need specifically for the role. It’s also hoped that the training will form part of the Birmingham 2022 legacy as newly trained individuals will be able to find work in other security roles in the future.

Oldbury resident Tarveen Kaur is one of the people to have secured a security role at the Games. Tarveen herself has her sights on a future in security after the Games have concluded.

“This feels challenging and I love challenges. I’m planning to be in security after this,” she said. “It’s always been on the corner of my mind, most of my friends do security but it’s been mostly males. Me being a female, I’ve always felt I couldn’t do it.

“Since I’ve discovered this opportunity, I really want to take as much as I can from it. With the Commonwealth Games kicking in, you’re not just a door supervisor, you’re working as part of a massive team and breaking down stereotypes.”

Rachel Freeman is the HR director for GMS Group who will be hoping for a successful Games. Rachel spoke about why people should get involved in security, noting a lack of diversity in the industry.

“I believe it’s a good way to get long-term meaningful employment. There’s a real shortage of quality licenced operatives and I think it’s a good opportunity for people to gain recognised industry training and long-term employment,” she said.

“We recognise the diversity issue in the industry, we want to do all we can to address that. I’m really passionate about women being able to access the opportunity to earn good money.”

Nicole Evans opened a security business named In Stewards We Trust LTD with her partner which is aimed at the stewarding aspect of security. Nicole believes gaining a SIA licence is important as an employer and is training for her licence ahead of the Games.

“If I could get a jist of what my staff are going to do, it will make me a better employer. It can also promote having more women in the industry,” she said.

“I’ve worked in events previously and have worked alongside stewards, I’ve had insight into it. It’s been very clear what we’re here to do and what we can take from the Games, it’s been good.”

Amy Thorsby found the induction day of training fun and enjoyed being around the new workers. Returning back to work from being a full-time mother, Amy believes the Commonwealth Games is a great thing to have on a cv. “If I pass, it would be a really good thing to have on my belt for future reference. In the long run, I’d like to do private detailed security,” she said.

“I won’t get ahead of myself. But the Commonwealth Games is a good start.

Subal Saqib moved to Birmingham from Pakistan five years ago and was also in attendance at the training day. After hopefully gaining her SIA licence, Subal has aspirations to become a police detective.

“If I like security more than policing, then I’ll stick with that. To become a detective is a long process,” she said. “When I was in Pakistan, I was applying for intelligence army roles. But my stepfather received a visa here.

“My city in Pakistan is called Lahore and I feel like Birmingham is a mini Lahore. I find that really good, I’ve seen lots of my community here. This is the best job and best thing (Commonwealth Games) going on. I feel like I’m now going to be a part of it, it’s really exciting.”

Nyasha Yvonne Roberts has been offered her SIA licence and made the decision to have a career change. The former carer and support worker praised the training which ultimately led to her being offered a role at the Games.

“If it wasn’t for the course, I wouldn’t have had a clue. I now understand a lot now about security and the procedures.”

Man tried to sneak into a nightclub he was banned from and then threatened to kill the bouncer when he was found out.

Man that was racially abusive to a security guard and has a ‘lengthy’ list of previous convictions, is jailed for four months