A DOORMAN who has experienced “horrible” spiking cases and was once targeted himself says it is “100 per cent” plausible recent victims may have been injected. 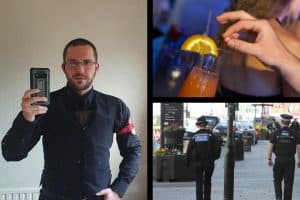 Liam Chaplin, 24, of Clacton, has worked as a door supervisor for more than four years, covering the likes of the Moon and Starfish and Tom Peppers.

In recent weeks night-life hotspots across the country have been rocked by a myriad of concerning reports of bar-goers being drugged.

Essex Police have received at least 15 reports of spiking in Colchester town since August and many victims have spoken to the Gazette about their horrifying ordeals.

Mr Chaplin, who has himself been spiked, has now shared his views on what some people have described as a welfare epidemic.

He said: “Dealing with someone that has been spiked is horrible because they cannot communicate with you and you have to check on them every minute to make sure they are stable.

“When I got spiked, given my experiences of being a doorman, I managed to find my mates and they managed to get me home.

“Luckily for me the drug they used was not as strong as some of the cases in Colchester.”

In addition to the implementation of other measures which could deter spikers, Mr Chaplin says there needs to be a greater police presence in problematic areas and better use of CCTV.

He also believes councils should look into employing more security teams which specialise in working on night-time events.

Mr Chaplin has also urged punters to educate themselves on how to identify a spiked drink and put their own safety precautions in place.

When asked if it was wrong to place the onus on the bar-goers as opposed to those spiking them, he said: “I strongly disagree because education is the way forward.

“Never leave your drinks unattended, but if you do for more than 30 seconds get a new drink.

“Do not go out alone and try and have friends with you and make sure there is always one or two of your group responsible for getting everyone home safely.

“But door supervisors are not responsible for watching drinks when they have hundreds of people to protect – that is the clubbers’ own responsibility.”

According to Essex Police there has so far been no evidence to suggest any of the 15 reports of spiking they have received have involved injections.

But, given his experience on the nightlife’s frontline, Mr Chaplin believes administering drugs in such a way is plausible.

He added: “100 per cent and I fear the drugs are potentially far more dangerous and lethal.”