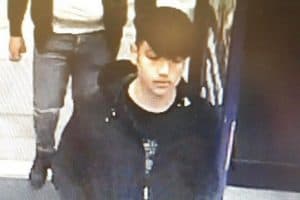 Police have released a CCTV image after a shoplifter spat at a security guard.

The incident took place at a shop in Castle Retail Park, Radford at around 1.35pm on Sunday, June 6.

A man is believed to have walked out of a shop with a number of items he hadn’t paid for – before security questioned him.

It is then alleged he spat at one of the guards before walking off.

Officers have now released images of a man they believe can help their investigation.

Assistant Chief Constable Steve Cooper, of Nottinghamshire Police, said: “This reported behaviour is absolutely unacceptable, and at a time when we are in a global pandemic and are working tirelessly to prevent the spread and effect of a deadly virus this is not only disgusting but could also be extremely dangerous.

“We would remind everyone that whilst lockdown measures are easing, the vaccine rollout is being extended and we continue to move forward with the government’s roadmap, restrictions and social distancing measures continue to be in place. This is to reduce the spread of the virus and subsequently protect communities and the NHS, which is of the highest priority.

“It is also not part of the job for security to be expected to tolerate such actions as this, and we will investigate where such reports are made to us.”

PC Omar Elgaziari, investigating the incident, said: “Shoplifting in itself is unacceptable but on top of this security staff should not be faced with these kinds of actions that have been reported when they confront someone they suspect of stealing items.

“Our enquiries into this incident are ongoing and we would encourage anyone who recognises the man in the image to get in touch with us. We are keen to speak to him as we believe he could help us with our investigation.”

Anyone who recognises the man or anyone with information is asked to get in touch with Nottinghamshire Police on 101, quoting incident 456 of June 6.