A Cambridge man who took his own life on Stourbridge Common last year “felt there was no justice in this world”, his father has said. 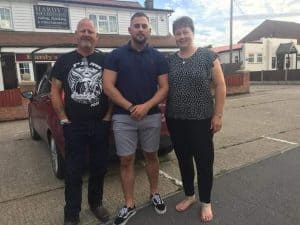 His dad Gary Brown, from Willingham, has paid tribute to his son, a funny and “doting” father-of-two whose mental health tragically spiralled in later life.

An inquest into Sean’s death is ongoing, but Mr Brown claims that his son was let down by police and mental health services.

Sean, who grew up in Barnwell, Cambridge “excelled at everything he did,” said Mr Brown.

Following in his father’s footsteps, he had a passion for banger racing – earning second place in the Southern Championship one year.

Later, he “found the life of the nightclubs” and became a doorman.

“He was a brilliant doorman, in respect of he wasn’t a bully or thug,” said Mr Brown.

“When problems started he would get in there and try to tactfully, verbally sort it.”

As a last resort, “he picked people up and put them outside.”

At 28-years-old, Sean was working three jobs as a cleaner in the morning, a delivery driver in the day, and a doorman in the evening.

“I cannot be any more proud of a father, [that] on his own initiative, Sean held down three jobs,” said Mr Brown. “He was a doting father, he absolutely loved his children.”

During a turbulent 18-month relationship – in which he decided to “immediately” stop taking steroids – Sean sadly “lost control of his emotions and started trying to commit suicide,” said Mr Brown.

He found himself in hospital having lost his jobs, with little money left and the property he rented closing.

After his release from hospital in February 2018, a non-molestation order was put in place.

“It was devastating, absolutely devastating,” Mr Brown said of the case’s impact. “It massively, massively affected his mental health. He felt there was no justice in this world.”

Days later, Sean took himself to the roof of the Grand Arcade shopping centre and threatened to end his own life.

Though his mental health showed signs of improvement at points over the next couple of years, Sean’s family struggled to reach him while he was living in shared housing.

They could not contact him from February to November 2019 when, unknown to them, Sean had an altercation with a friend which took a further, devastating toll.

He had broken the man’s jaw after a drunken night out. The following week Sean reported to police that the former friend and his brother had turned up outside his house carrying knives.

Attending officers could not find the weapons and the brothers were released to go about their business.

Filled with remorse, Sean claimed he was receiving threatening messages and told the friend he punched that there was no need to send his friends round to hurt him “because he felt so guilty he would do it himself,” according to a record of his conversation with CPFT’s First Response Service.

With his hair and beard growing long and weight increasing, Sean’s dad questioned why nobody had noticed that his son had “gone into a very, very bad place.”

A diary found after Sean’s death indicated that he had not interacted with mental health services from March 2019 until his death on August 5, 2020.

“Had there been some intervention he might be alive today,” Mr Brown said.

When he entered the funeral parlour to cut his son’s hair, as he had in life, Mr Brown did not recognise him.

“I leaned in his coffin and cupped his face with both hands, and said to him, ‘I’ll get you some sort of justice, even if it’s just in writing’.”

At his funeral at Cambridge Crematorium there were over 300 people, Mr Brown said.

“Since his passing, I’ve had three people come to me and explain that without Sean’s help they wouldn’t be alive today – because he would help them. But he couldn’t help himself.”

“Everybody that knew him loved him,” Mr Brown added, “he just found funny things in everything.”

An inquest into Sean Brown’s death opened on August 13, and the final hearing date has not yet been set.

Cambridgeshire Police said: “We can confirm a complaint has been made and an investigation into the matter is ongoing – it would therefore be inappropriate to comment further.”

You don’t have to suffer in silence if you’re struggling with your mental health.

As well as turning to close friends or family – there are plenty of charities you can talk to or get advice from.

Here are some groups you can contact when you need help:

Depression Alliance: A charity for people with depression. No helpline, but it offers useful resources and links to other information.

Students Against Depression: A website for students who are depressed, have low mood, or are suicidal. Click here to visit.

Campaign Against Living Miserably (CALM): For young men who are feeling unhappy. There is a helpline: 0800 58 58 58 or visit the website.