A fisherman has been jailed for smashing a mug into the face of a doorman outside a bar in Brixham. 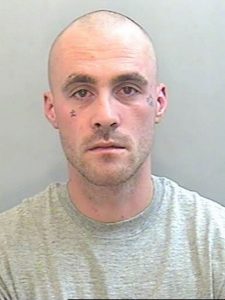 Kerren Guyan, 29, attacked Mark Walsh at Jackz Bar after refusing to believe his girlfriend was not inside.

He was banned from the premises but the doorman tried to help him by showing him inside and convincing him she was not there.

But instead of leaving, a raging Guyan punched him from behind then used a mug to assault him.

The defendant described himself as a ‘stereotypical fisherman’ who liked to get drunk and take cocaine when back at shore.

The judge said he had a history of violence and jailed him for 16 months.

Prosecutor Mr Herc Ashworth said just before midnight Guyan arrived at the bar and demanded to see his girlfriend. When told by Mr Walsh there were only two men inside he refused to accept it and became abusive.

He walked off towards New Road and picked up a road sign which he threatened to throw through the bar window, said the prosecutor. As Mr Walsh turned his back he was punched him and knocked to the ground.

A bar steward saw Guyan walk away but he returned 15 minutes later carrying a mug he had used for a cup of tea at his friend’s house.

Guyan, who was still convinced his girlfriend was in the pub, started to threaten the bar steward telling him he was going to knock him out.

“He swapped the mug from his left hand to his right hand and, completely unprovoked, swung it at Mr Walsh connecting with his eye and knocking him back about four feet,” said the prosecutor.

The doorman was left with blood pouring from his face. He suffered a severely bruised eye, cuts above and below his eye, to his forehead and eye socket. There was swelling to his cheek , numbness to the side of his face, jaw and teeth and a fractured eye socket.

He said in a statement he had worked as a doorman in the town for five years and had never suffered such a serious assault. The violence was harder to take as he had been doing his job, trying to calm and help the defendant.

“I’d like to think he’d learn you can’t go around glassing people and that they’ll be repercussions. I was just trying to do my job.”

Guyan has 36 previous crimes to his name. They include assaulting a police officer, battery, and causing actual bodily harm. In 2016 he was convicted of a similar offence in a bar.

Mr William Parkill, defending, said that Guyan had a massive cocaine problem for many years but was now putting it behind him. He had not had any help from probation in the past and would benefit from that. He said getting drunk, drinking and fighting had been part of his life as a fisherman, a job he had done since he was 15. He was genuinely sorry for what he had done and would pay compensation.

Judge David Evans said he had considered carefully whether he could suspend the sentence. But he said the violence was just too serious to do so.

“You caused him serious injury. He was someone providing a public service. There was a significant degree of premeditation and the quite deliberate use of the mug as a weapon in the assault.

“You clearly present a risk to the public particularly while under the influence of alcohol. This is too serious for anything other than immediate custody.”

Heather Baily appointed as Chair of the SIA