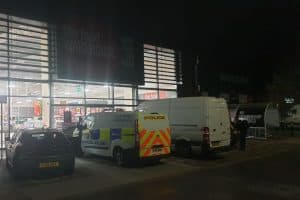 A brave security guard foiled an attempted burglary at a Leeds supermarket on Tuesday night after he tackled a man armed with a crowbar as he tried to escape with cash.

The force said a man, who was armed with a crowbar, had entered the store and used the tool to prise a cashbox from the till.

But as he attempted to leave he was tackled to the ground by a security guard near the exit of the store.

The security guard was then assaulted during a scuffle before the man dropped the cash box and fled empty handed.

West Yorkshire Police (WYP) has confirmed the employee was not seriously injured.

The force is now appealing for information and has described the suspect as white, around 5ft 8ins tall and dressed in a yellow hi-vis jacket.

Anyone who witnessed the incident, or who has any information that could assist the investigation, should contact Leeds District CID on 101, quoting crime reference 13210508289.

Information can also be given anonymously to the independent charity Crimestoppers on 0800 555 111.

Blackpool security guard ‘believed he was delivering newspapers’, not Class A drugs