A member of a gang that attacked a G4S security guard in a broad daylight during a cash-in-transit robbery outside a Bradford supermarket has been jailed for three years and four months. 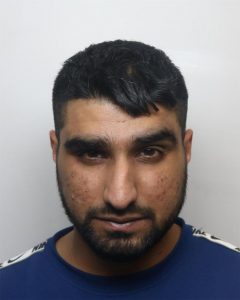 Qasib Hussain, 23, of Idle Road, Five Lane Ends, Bradford, was one of three men who took part in the £12,000 raid outside Tesco Express on Bolton Road just after 1pm on July 27 last year.

In November, Mohammed Farid, also 23, of Newport Place, Manningham, Bradford, admitted his involvement in the robbery and was also jailed for 40 months.

A third unidentified man was part of the gang but still at large, Bradford Crown Court heard today. Video footage of the robbery showed him bringing a hammer down either onto the security guard himself or his van.

Farid then threw gravel or wood clippings in the man’s face as he tried to get up.

The robbers fled in a red getaway car with a cash cassette containing just over £12,000. The police located the unopened canister because it was fitted with a sophisticated tracking device. It was traced to a house in the area and recovered unopened along with a jacket with Farid’s DNA on it.

The security guard, who was not injured in the robbery, activated his alarm and noted down what he thought was the registration number of the getaway vehicle. It was discovered to be registered in a false name and address and later found burned out.

Hussain pleaded guilty to robbery and was sentenced on a video link to HMP Leeds where he was remanded in custody.

His barrister, Andrew Dallas, said the security guard was uninjured and so could not have been struck by the hammer. His van was scraped by the weapon during the robbery.

Hussain was no longer in the grip of a drug addiction and felt better in himself and more positive about the future.

“He intends to start a new life as soon as he can,” Mr Dallas said.

Judge Neil Davey QC said the gang lay in wait for the courier to rob him. He was target-ed by the men.

Hussain, like Farid, was entitled to a discount of about 25 per cent on his sentence for his guilty plea, reducing the term of imprisonment from 54 months to 40 months.

Source – The Telegraph and Argus