THREE people who “kicked off” outside a Bournemouth bar in a “disgraceful” incident have appeared in court. 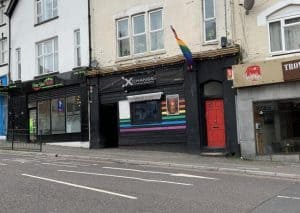 A doorman suffered eye injuries as the drunken group repeatedly tried to get into Bournemouth’s Xchange Bar at 4am.

The incident took place at 4am on June 8 last year. The group had left the bar but then decided to return. Mr Abusah refused them entry.

CCTV shows them repeatedly targeting the doorman, who was struck in the face.

The group are seen to leave several times, only to return, targeting Mr Abusah.

Sentencing, Judge Robert Pawson said: “You were out in the early hours of June last year, whether you remember it or not. All three of you had drunk far more than was good for you. You kicked off together.”

He told Redmond-Smith: “You were in the thick of it over the course of 10 minutes. You used violence to try and impress others and prove yourself.”

He told 19-year-old Charmaine Short: “You were egging on the boys, pouring fuel on the fire, making things worse.”

The court heard Jordan Short, 22, has 16 previous convictions including three for robbery and one for dangerous driving. Judge Pawson told him: “You have got a pretty appalling record.”

The court heard Redmond-Smith works in a family business, helping ex-homeless people and drug users to improve their lives.

Charmaine Short is a call centre worker and Jordan Short is unemployed.

Redmond-Smith was given a six month prison sentence, suspended for 12 months and a three-month curfew between 7pm and 6am, to be electronically monitored.

He was also ordered to pay compensation of £1,250 in five monthly instalments of £250. He was given a two-month suspended prison sentence for the actual bodily harm, to run concurrently.

Charmaine Short was given an 18-month community order to include 100 hours of unpaid work and up to 25 rehabilitation activity days.

Jordan Short was given a nine-month prison sentence, suspended for 18 months, and a three-month curfew.

SCREAMING Solicitor attacked a Doorman with one of her Stiletto shoes