A Cleethorpes doorman was attacked with a bottle as he tried to help an unconscious assault victim.

Jordan Arnold, who has been working the doors of clubs for over a year now, was attacked in the early hours of New Year’s Day and suffered cuts to his head. 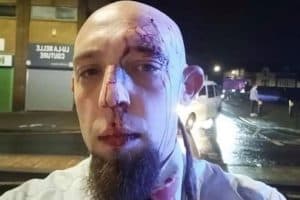 It happened on the resort’s High Street as he made his way home from a busy New Year’s Eve shift.

But Jordan says the attack hasn’t put him off his work – and says he hopes he ‘did his job’ by helping out the victim.

Jordan said: “I had just left Beach bar at around 4am and was on my way home when I saw a guy with blood pouring down his face crying out for help.

“At first, I thought he was being beaten up so I crossed over the road to go and see if I could help in any way.

“When I got to the scene I quickly realised that the gentleman I’d originally seen had knocked somebody else unconscious.

“The person they’d hit was lying on the floor with their head split open.

“As I approached I made sure to stay as calm as possible, telling them enough was enough with my hands outstretched so they didn’t think I was a threat.

“From what I could see, there were four people standing around the victim, who was unconscious, but a fifth appeared out of nowhere from behind and struck me on the back of the head with a glass bottle.

“After that, they all just ran off in front of me. I stayed with the guy who was unconscious on the floor though until the police and ambulance arrived.

“When I explained what had happened to the police, they told me they think they had footage of the people in question.

“Society have told me they also have CCTV footage of this group of lads in the area that night.

“I’ve been working the doors for a while now, spending last year in Mablethorpe. You do see some rough things in this line of work, I’ve witnessed stabbings and even someone having their back and neck broken.”

But it hasn’t put him off the job.

He said: “However, even if I wasn’t a doorman, I wouldn’t have acted any differently. If I wasn’t the one to take the bottle who knows what might have happened.

“This doesn’t deter me from my job either, I tried my best to help and I’d like to think that I did a good job”.

A Humberside Police spokesman said: “Investigations have been launched after two men were injured in an altercation in High Street, Cleethorpes.

“We were called at 5.25am on Wednesday, 1 January, following reports of the incidents.

‘I did what I had to do’: Nightingale Hospital security guard saves woman’s life