A security guard who claimed he believed he was delivering newspapers instead of Class A drugs has been jailed. 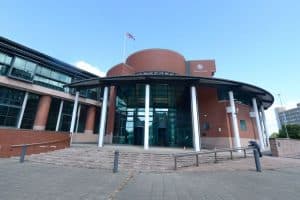 Paul Mark Schofield was today (April 28) jailed for 31 months for his part in the supply of heroin and crack cocaine in Blackpool between 2019 and 2020.

The 53-year-old was caught out by undercover police officers who codenamed him Vanilla as part of Operation Spalding.

Preston Crown Court heard Schofield had been driving a dealer around Blackpool to deliver drugs and also delivered them on his own.

Prosecutor Kimberley Obrusik said: “On December 13 just after 11am the undercover officer Robbie had driven to the meeting spot and there was a male in the passenger seat who they had never seen before.

“He was codenamed Nettle and Vanilla, this defendant, was driving the vehicle. Nettle provided two wraps of crack cocaine for £30.

“This defendant was involved because he was driving. He was asked when the Tony 2 line was working and this defendant said it depends on the driver and said he usually finished at 8.40pm.

“On January 8 last year the JJ2 line was called by the undercover officer and requested one wrap. The Nissan Qashqai arrived and this defendant was driving.

“The officer got into the front passenger seat and this defendant informed him the drugs were by the gear stick. He took one of each for £30.

“On January 23 the officer called the JJ2 line and requested one of each. He was directed to Home Bargains in Blackpool and received a text message saying ‘two mins a black Nissan will arrive’.

“This defendant was the sole occupant and handed him one of each for £30.

“While in the vehicle the defendant’s phone rang, he answered it and the officer heard the male he had spoken to earlier to order the drugs.”

The court heard Schofield has 12 previous convictions but none related to drugs.

When he was arrested and interviewed Schofield read out a prepared statement in which he said: “I have been shown footage which purports to show me supplying controlled drugs. I do not believe the footage shows me undertaking such activity and I therefore do not propose to answer any questions put to me in interview.

“But I am prepared to cooperate in an identification procedure.”

An identity parade was carried out and Schofield was confirmed to be the driver of the Nissan.

The court heard that when Schofield was interviewed by the Probation Service for a pre-sentence he said he had initially believed he was driving someone around who delivered newspapers.

Defence barrister John Woodward said Schofield had tried to get out of delivering drugs but had been threatened against doing so.

“It was borne out of naivety and trying to help people,” Mr Woodward said.

“He is a very kind-hearted man who got into deep water and when that water got deeper these people issued threats to him.

“His house was burgled, that was reported to police, and his suspicion is that it was the people involved in this.

“In January he managed to extricate himself. He is not a drug addict although he does have issues with alcohol.”

Schofield pleaded guilty to five counts of being concerned in the supply of Class A drugs and supplying Class A drugs.

Judge Andrew Jefferies QC said he has ‘serious doubts’ that Schofield believed he was delivering newspapers at first.

“You are quite different from many other defendants I have sentenced as part of Operation Spalding in that you are not vulnerable and subject to the exploitation that they were,” the judge added.

“I really struggle to understand why, given your job, you succumbed to this particularly after not being in trouble since 2014.”

Schofield was told he will serve half of his 31-month sentence in custody and the remainder on licence.