A Belfast man who stole two bottles of perfume and then handed them to a security guard has been jailed for eight months.
Kevin Corbett claimed to be checking he had selected the correct fragrances. 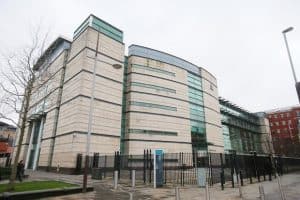 The 26-year-old, of North Queen Street, pleaded guilty to two counts of theft and criminal damage.

Belfast Magistrates’ Court heard he went into House of Fraser on November 26 last year, lifted perfume bottles valued at £176 and put them in his jacket.

Prosecution counsel Iryna Kennedy said: “He moved to the next floor, approached a security guard, handed the items to him and stated that he couldn’t pay for them.”

Wrapping had been torn and anti-theft tags removed.

“He was interviewed and stated he selected the items, decided to check if they were the correct ones and gave them back,” Mrs Kennedy added. Defence barrister Conan Rea attributed Corbett’s offending to a drugs problem.

He imposed four months custody for the new offences and a further four months from previous suspended prison terms.

Mr McStay said: “The court has to deal with this man firmly.”

Furloughed Bradford security guard, 27, took his own life after sinking into depression