The law isn’t doing enough to protect security staff. Here is our case as to why all SIA licenced security staff should be added to the Assaults on Emergency Workers’ Act and receive the same protection as Emergency services workers.

What is the ‘Assaults on Emergency Workers’ Act?

The ‘Assaults on Emergency Workers’ act is an law of Parliament that was passed on 13th September 2018. The act was created with the aim of protecting emergency workers that may be assaulted while performing their duties.

As a result of the act, an offense against any of these employees could now lead to double the possible maximum sentence. The act definitively states that offenses like aggravated bodily harm (ABH), grievous bodily harm (GBH) and verbal threats are now subject to the increased penalty.

The idea, of course, is that harsher punishments will hopefully serve as a deterrent to others who might try to assault emergency workers.

Why the Act was Brought in

The year the act was passed saw a considerable increase in assaults against emergency service workers. Between 2017 and 2018, over 26,000 attacks on police officers and 17,000 attacks on NHS staff were reported.

The figures tell a sad story. Attacks on NHS staff have increased by 10% over the last 12 months, while 72% of ambulance staff have reported being attacked while on duty. Additionally, in the last 5 years, violence against police officers has increased by 34%. 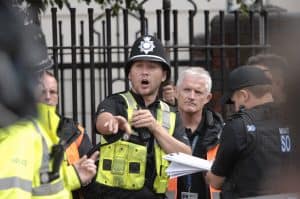 Front line staff welcomed the ‘Assaults on Emergency Workers Act’ with open arms. The general sentiment was that emergency workers should be able to do their jobs (which in many cases involve protecting people and saving lives), without the fear of being assaulted in the process.

Nobody is going to argue that front-line staff don’t require (and deserve) this added layer of protection. The question being asked here is why other front line workers – such as Door supervisors and security staff working in retail – are not also afforded this increased protection?

The upsurge in violence is not limited to those professionals named by the act. Door supervisors and security staff are just as much ‘in harm’s way’ as emergency workers. Their duties also involve keeping people safe, dealing with violent or unruly people and responding to emergency situations. So where is their extra protection?

Even within the act, it covers security staff that are protecting and supporting NHS staff and services, So if it is covering the same staff protecting the NHS, why isn’t it protecting others that have face-to-face interactions with the public and are in the same firing line?

Analysis of available data concludes that the majority of perpetrators and victims are young men aged between 18 and 24. Data also reveals that most violent incidents occur between 11.00pm and 3.00am.

violence and alcohol go hand-in-hand. Some figures suggest that up to 64% of all violent incidents are connected with alcohol. It is logical to conclude, therefore, that if a large number of people gather in a small area and consume large quantities of alcohol, interpersonal problems, or even violence, may occur.

In addition, increases in temperature, noise and overcrowding have been proven to provoke aggressive responses from people.

Consider, if you will, the average UK nightclub on a Friday or Saturday night. The music is blaring, people are shouting at each other over the din. There is also dancing, and the body heat from both this and the sheer number of patrons is causing the temperature to soar to uncomfortable levels. Adding alcohol to this scenario can be like throwing gasoline onto a raging inferno – and yet we do it. The bar is open and serving. People are drinking, some are drunk. Everyone is tired after a long working week and the hormones (especially testosterone, an excess of which has been shown to make men overconfident, stupid and generally aggressive) is flowing like Budweiser on tap. In short, violence could erupt at any minute.

The main deterrent against patrons taking violent action (aside from their own consciences) is the presence of security staff. Sometimes, police patrols will pass by specific establishments, even looking in to make sure everything is status quo. But that’s only sometimes. The rest of the time, the security staff on site are the one thing keeping the patrons safe and stopping potentially dangerous situations from boiling over.

The changes that came in the wake of the Licensing Act of 2003 (which came into effect in late 2005), coupled with the drastic reduction of police numbers and funding in recent years has forced many security personnel into the position of ‘last line of defence’. It is a position for which they are unqualified, unprepared and unprotected.

It comes as no surprise, sadly, that many security personnel are reportedly suffering from post traumatic stress disorder (PTSD) as well as other psychological conditions as a result of the pressures they now face in their professional lives. PTSD is a serious – and sometimes lifelong – condition and any measures that can be taken to help prevent PTSD developing among security personnel should be taken immediately.

In 2015, an SIA violence reduction report was commissioned in order to better explore and understand the perceptions and experiences of violence as it pertains to the night time economy. The report contains the most recent, official information regarding offences committed against SIA licenced staff.

The study brought together over 800 people employed within the security industry. Of those interviewed, 44% were door supervisors, 21% were security guards, 12% provided event Security and 11% worked exclusively in retail security.

By far the most alarming result found by the study was that 96% of all the security workers involved in the study (a whopping 768 people) had experienced one or more forms of abuse while at work. 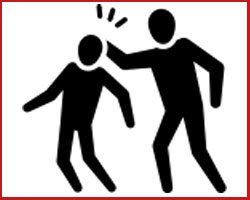 The study further revealed that 70% of those asked had been the target of physical assault, with 46% requiring first aid and 34% (that’s 272 people) ultimately being hospitalised. 88% of interviewees said that they had at least experienced verbal abuse. The figures were damning, showing that the security industry stands close to the police service in terms of the violence experienced by its staff.

According to the rest of the report, 65% believed that regular violence (or the threat of violence), would be enough to drive people away from the industry. 63% felt that better physical protection would be beneficial and a massive 75% called for security staff to be better supported by both the government and the public at large.

The study tells a clear and consistent story, but is anybody actually listening?

Why the Act Should Apply to ALL SIA Licenced Staff

The following are 5 compelling arguments in favour of SIA licensed staff being covered by the ‘Assaults on Emergency Workers’ act.

4. It would help to protect workers

The statistics are making a clear and unambiguous point; a lot of people in Britain feel that they can assault security personnel with little – if any- fear of recourse. This, of course, is totally unacceptable. If it became common knowledge that attacking a door supervisor or security guard was punishable by up to double the maximum sentence already in place, it seems certain that less people would try to harm them.

Today, many security guards wear personal cameras, stab vests and almost all venues feature some sort of CCTV. Any assault captured on camera would result in a harsher punishment, which would hopefully deter many would-be attackers. As a deterrent, this could not only increase the safety of security staff across the UK, it could also help to keep the customers safe. This is, after all, the most important duty of any security worker.

5. More people would enter the industry

Adding security staff to the list of emergency workers covered by the act could have the knock-on effect of stimulating growth within the security industry, bringing in the ‘right type’ of person into the job.

It is the contention of this article that the protections afforded emergency workers by the ‘Assaults on Emergency Workers’ Act of 2018 should be extended to include all SIA licensed security staff for the reasons listed above (and many more besides).

Although technically not emergency workers, security personnel are often called upon to act as emergency workers (and are also classed as Key Workers) – and their responsibilities and training definitely overlap with those of the other professions explicitly protected by the act. That they should be excluded from protections afforded to other professions by a mere technicality is a travesty. If there are other, extenuating circumstances explaining their exclusion, then these should be reappraised and reconsidered in light of the data gathered here and elsewhere.

Some may argue that dealing with aggressive, even violent people is simply part of the job. After all, some professions just bring with them an element of physical danger. The police service, the armed forces and fire prevention services, to name but a few, are all careers in which physical risk is a component. However, even though security staff are aware of and accept the risks involved in their jobs, there is no reason at all that the government should not attempt to reduce those risks, especially as circumstances beyond the industry’s control have so greatly exacerbated those risks over the last 10 – 15 years.

Security staff are vital to the night time economy, which is vital, in turn, to Britain’s overall economic performance, but this suggestion is about more than that. This is about safety, it’s about caring for one another and it’s about helping the people who keep us safe to stay safe themselves.

As we have seen over the pandemic crisis, key workers are an essential part to our everyday lives, security staff, along with the police and ambulance and fire, help keep law and order. It is only right that the privileges that are afforded by this law is also offered out to SIA licence security staff.